Yet another completely irresponsible tweet from the BBC's Jon Donnison 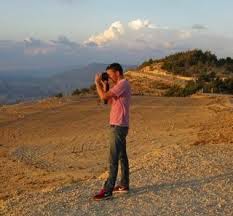 I'd just like to comment on a thread at Biased BBC that concerns blog 'favourite', BBC Sydney correspondent Jon Donnison, as there a few points that need making...

...and, at the end of this post, we'll see another shocking example of Jon Donnison's irresponsible tweeting.

Jon Donnison, as you will doubtless remember, cast considerable doubt on that and has still refused to admit Hamas' responsibility.

Alan wonders why he hasn't linked to that article.

The article in question comes in for considerable criticism in a 'below the line' comment. One point made here is that:

The article refers to two particularly horrific crimes. (a) The kidnap and murder of three boys, by murderous kidnappers, and (b) the kidnap and murder of one boy by murderous kidnappers. One of these crimes (crime b) is personalised, by providing the name of the victim, twice, within two paragraphs. The other crime (crime a) is not personalised in this way.

This seems to me to be a fair and serious criticism - and it's one that many (both here and and Biased BBC and BBC Watch) have had to make before, given that it keeps happening. The offending passage from the BBC article runs as follows:

This covers events prior to and during last summer's conflict. The period includes the kidnapping and murder by Jewish extremists of 16-year-old Palestinian Mohammed Abu Khdair on 2 July, one of the events which fuelled an escalation of violence which led to the outbreak of the summer conflict.

The Biased BBC commenter also criticises the article's use of language in describing one set of killers as "Jewish extremists" and the other set as "Hamas militants".

Going back to Jon Donnison, another Biased BBC commenter - John Anderson - asks a question we've been asking for months:

Donnison must know his views on Israel have been under a great deal of attack. Now he is away in OZ – why doesn’t he STFU and concentrate on the job he is paid to do? Normal BBC arrogance?

And given that the BBC seems to have moved him there somewhat against his will, perhaps because of that reputation for bias he'd been building up and his run-ins with the Israeli government, why isn't the BBC taking him to task over the continuing 'reputational damage' his grossly biased tweeting is doing to them?

Jon Donnison replaced Nick Bryant in Australia. Whatever Nick's downsides (his regular pro-immigration bias, for example), at least he cared about Australia and enjoyed reporting about it, however frustrating he sometimes found its politicians. His blog was busy and interesting to read.

His replacement's mind, however, seems to be pretty much anywhere else other than Australia. He's gone from a place that means everything to him (Gaza) to somewhere that seems to mean next to nothing to him (Australia).

Australia deserves a BBC correspondent who cares about it. Bring back Nick Bryant!

Pounce at Biased BBC quotes some of JD's latest outings on Twitter:

Not quite sure where these "no go areas" in French cities are that Nigel Farage is talking about, but I think we can assume he's never been.— Jon Donnison (@JonDonnison) January 14, 2015

...to which may be added his latest offering:

IDF Intel's Itai Brun on Abbas: "Abbas does not want terrorism. He does not use doublespeak and he does not incite." http://t.co/jlz3Xlwdjg
— Jon Donnison (@JonDonnison) January 17, 2015

Finally, a commenter at Biased BBC notes that the story behind the "Moroccan man murdered in Southern France in Islamophobic attack" tweet by Jon Donnison appears to be a good deal more complicated than the BBC reporter asserts:


The Mail on Donnison’s islamophobic attacker:
The attacker, who has been charged with ‘murder, attempted murder and possession of drugs’, is reported to have been diagnosed with schizophrenia. He has been committed to a psychiatric hospital.

The thing that struck me in clicking the link than Jon Donnison provided is that the article linked  to (from Global Post/AFP) is vastly more responsible in its reporting than the BBC man. It puts 'Islamophobia' in quotation marks and emphasizes that they are merely claims of Islamophobia:

A Moroccan man was stabbed to death in his own home in southern France in what a Muslim group called a "horrible Islamophobic" attack the week after France was rocked by the Charlie Hebdo killings.

"The Islamophobic aspect will be investigated when we interview this boy who claims to have heard voices," a spokesman added.

A source close to the investigation of the Beaucet murder said he did not think it was "a purely Islamophobic act," although he admitted that the events of the past week could have "stirred up fear and a rise in adrenaline". He said the alleged attacker was in an incoherent state when he was arrested near the scene.

Jon Donnison's tweet [Moroccan man murdered in Southern France in Islamophobic attack] ignores the quotations marks and simply asserts that this horrible murder was an Islamophobic attack - which, from the very start, as he should have known from reading the article he linked to, has very much been open to doubt.

So he's rushed out another completely irresponsible tweet then, pushing his own agenda.

When will the BBC take action?
Posted by Craig at 12:12