Should you take the sincerity of the spoken word for granted when you see or hear it on the media? Some might think, cynically, that what we get is more a matter of what the spokesperson has decided to say today.

That thought persisted when I watched the HardTalk with Zeinab Badawi and Suha Arafat. (H/T BBCWatch. Congratulations to Hadar Sela on a very well deserved accolade.)
HardTalk. 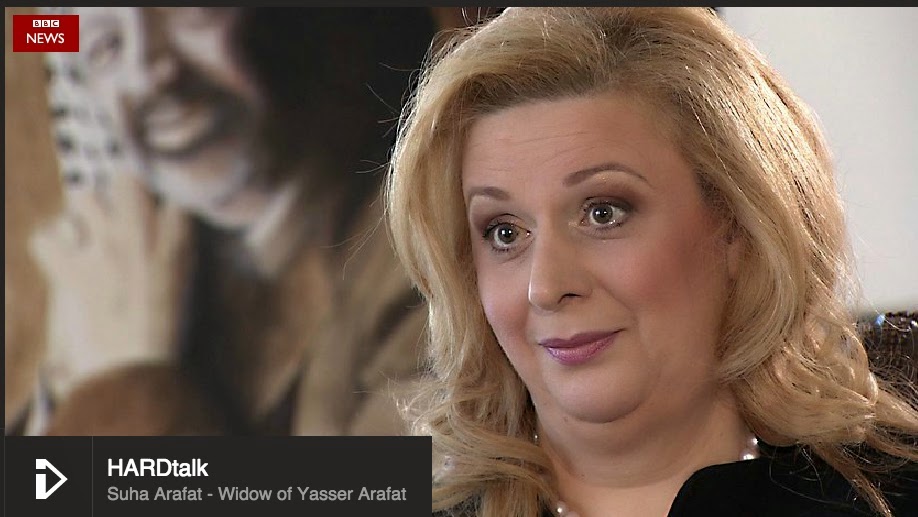 You know that expression ‘rats fighting in a sack’? Something like that popped into my head.
Zeinab and Suha. Two harpies play-fighting on the BBC.

Everyone who’s aware of Zeinab’s interviewing history would be pretty naïve to expect any kind of penetrating grilling from Zeinab, a least in the case of an Arafat.  In the event, apart from the usual propagandistic cliches that Suha knew she could get away with, it was Zeinab who came across as equally, if not more, ‘partial’ than the (relatively) poor widow.

Some of this interview was hilarious, some plain weird.  Hadar noted Suha’s evasive answers and picked out the most fanciful of the propagandistic allusions she slipped in, more of which later, but what about Zeinab’s performance?

Zeinab asks Suha “when you’re living in Malta in relative comfort and you see the struggling  of the Palestinian people....how does that make you feel?”
Well, Suha feels terrible, but she and her daughter wouldn’t be safe in ‘Palestine’.  “The name Arafat.. it’s not easy.” Fair enough. I can quite believe they’d be a sitting target,  even more so now that the Islamic State terror group has managed to set up bases of power in the West Bank and Gaza Strip.

The section one could call “Where’s the money?” was strange as strange could be. Zeinab mentioned eleven million dollars that were supposed to be in bank accounts “under your control - where is it?
“Where is the money?”
At that, Zeinab looked around with a theatrical gesture, meaning .... what? I don’t quite know. Did she mean the spartan fixtures and fittings? As in “I see no outward signs of wealth here?” Can’t be that.
Perhaps she meant the opposite. The ‘relatively comfortable' surroundings. Maybe she was alluding to the considerable sum Suha has very likely thrown at cosmetic dentistry and personal grooming. (Nice eyebrows, by the way.)
Well, “this is character assassination - not against me - against my husband.” Suha did look, momentarily, a little shifty. 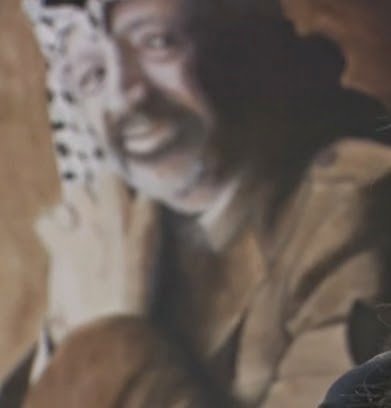 I must digress a minute. You know how the BBC crew will ‘stage’ these films? (well, they do) They’re inclined to fiddle with elaborate lighting contraptions and turn off any humming fridges. They spend time artfully placing the subject before a suitable background.

I just thought it was hilarious that a huge portrait of Yasser must have been wheeled in on a whacking great artists easel so he could leer down on the proceedings throughout the interview.  I wonder if they brought the easel with, as a prop? Perhaps Suha is a painter. 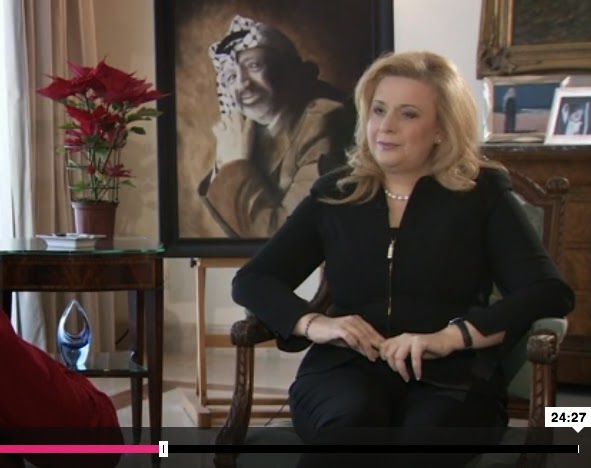 (Something about the Arafat countenance belies Suha’s insistence that her husband was a fitness fanatic before being poisoned with polonium. Yasser Arafat the health freak. Hmm.) 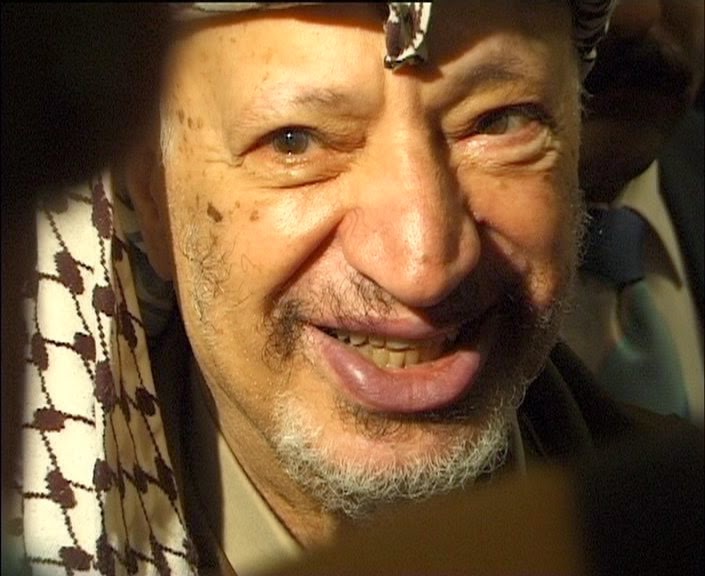 However, when it comes to the nitty gritty, it wasn’t clear who Suha fears most or regards as the greatest enemy, Hamas or Israel.

She said, or has decided to say, that she and Yasser hadn’t put all that effort, suffering and struggle “all our life” for Palestine to become an Islamic state. But “it should have Muslim law” “We want the Muslim laws, but not the Muslim state.”

So what’s the actual difference? I must say this seemed confusing, and if Zeinab had her wits about her she might have insisted on clarification.

Suha also said what happened in France was terrible, a crime, and France opened its arms to immigrants who should have been appreciative of the Liberté, Égalité and Fraternité they were lucky enough to experience in France

Zeinab turned to the subject of Yehuda Glick who had also been a guest on a recent HardTalk, and mentioned the ‘religious dimension’ to the problem. Suha then adamantly  defended the Muslims. “It’s not the time to provoke the Muslims.”

Suha keeps saying: “This is not a religious...it’s a nationalist cause”  Well if Mr and Mrs Arafat sincerely ever thought it was simply a nationalist cause, it sure ain’t now. Of course in truth, the whole basis of the Arabs’ rejectionism is religiously based. It is and always was a religious cause.

Regarding Hamas’s aspiration -  the extermination of Israel:

“You’ve also said recently that the armed struggle is no longer plausible. When you look at your husband’s legacy, with the olive branch in one hand and the gun in the other, do you believe that he was wrong, then, to believe that there could be an armed struggle that would bring results”

Suha decided to say,  “In the beginning Yasser Arafat agreed that there would be an armed struggle” History, not me,  will judge him, she declared.

She seemed to be saying that Hamas is making the people pay too high a price. She said: “Why did they not build shelters instead of tunnels?”

“Should now the armed struggle recognise Israel?” Asked Zeinab, with an inscrutable expression. Is Zeinab for or against?

It all seems a bit vague. A little bit woo and a little bit waay; a bit dodgy.
So what does Suha really think? 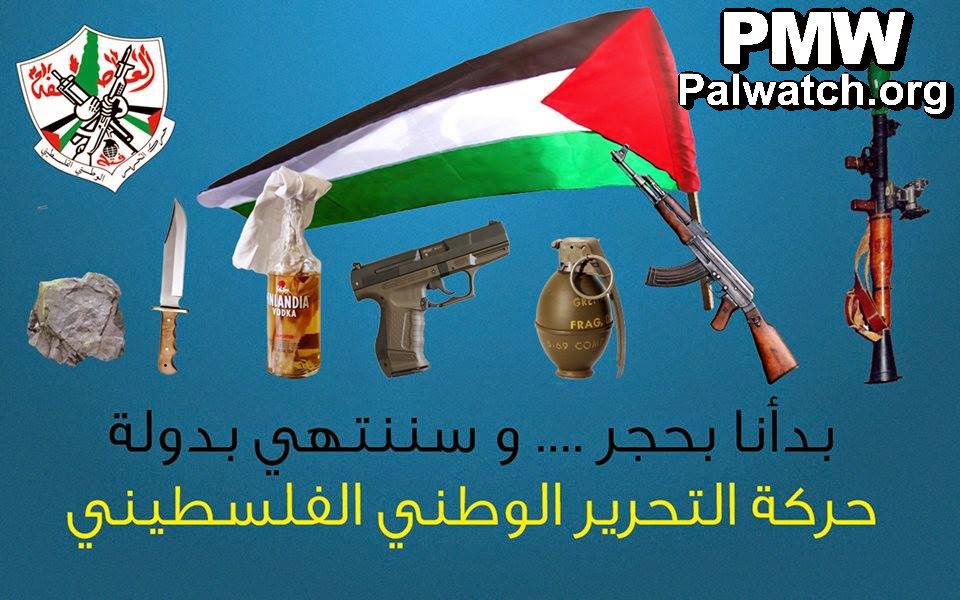 A few days ago, Mahmoud Abbas' Fatah movement posted the above picture to their official Facebook page. It demonstrates that the movement still favors violence as the way to obtain statehood.
A stone, a knife, a Molotov cocktail, a gun, a hand grenade, an assault rifle and an RPG illustrate Fatah's progress in terms of more and more sophisticated weapons. These are the means with which it works toward its goal - to "finish with a state," as the poster states: "We started with stones .... and we will finish with a stateThe Palestinian National Liberation Movement [Fatah]"[Facebook, "Fatah - The Main Page", Jan. 18, 2015]
For years, the Palestinian Authority and Fatah have promoted violence. Palestinian Media Watch has documented numerous statements emphasizing their adherence to "armed struggle" and veneration for the rifle. This week's stabbing attack in Tel Aviv was encouraged by such promotion of violence by the PA and Fatah who have both explicitly encouraged attacking Jews and Israelis with knives.

Does she not know about this? Perhaps she doesn’t do Facebook.

Hadar had treated us to a comprehensive list of Suha’s propagandist nuggets:

Finally this brings me to Zeinab’s pronunciation. Like Yolande Knell, she’s gone native on “Ramallah”. Rumul-lah!

I thought this carefully made-up Suha came across as much more reasonable than the Suha who made hysterical claims about Israel poisoning the old rogue. Perhaps everything she said was as carefully made up as her face. She wasn’t wearing her mad hat for HardTalk, and Zeinab seemed disappointed. No doubt she would have preferred to play the voice of reason against widow Arafat’s histrionic anti-Zionism. Instead Zeinab took the role of part sycophant, part interlocutor and part fellow anti-Zionist, slightly deflated at her failure to coax as much virulence from her subject as she’d hoped.    As Hadar said, a puff piece. 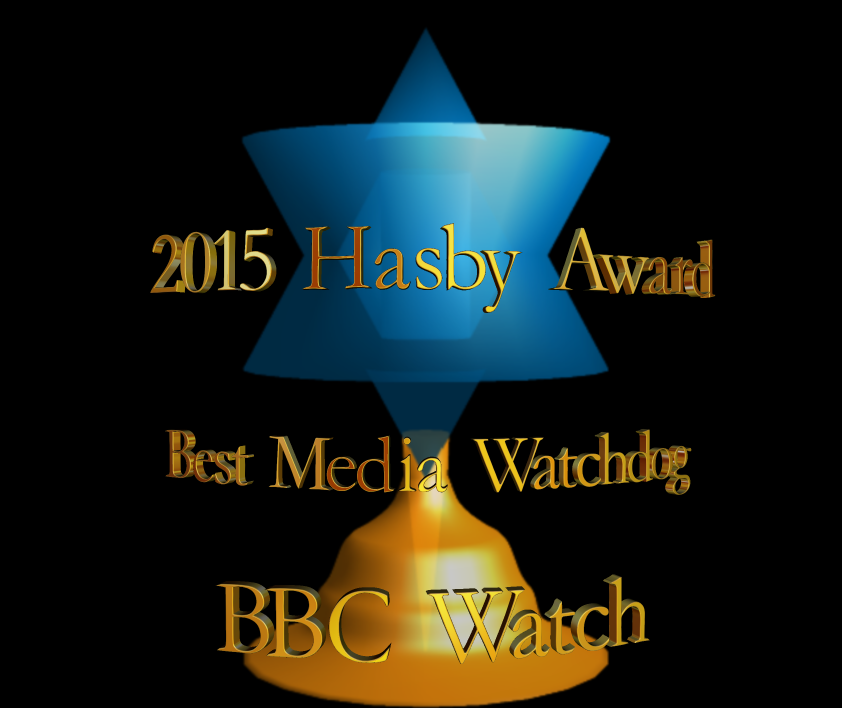