What happens when Anita Anand doesn't like what she's hearing? 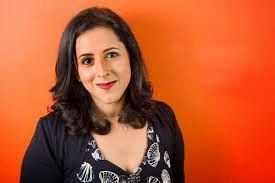 Here's Anita Anand's introduction to yesterday's edition of Any Answers?:

The attacks on the offices of Charlie Hedbo, a kosher supermarket and the cold-blooded murder of a policewoman in Paris have quite rightly caused collective outrage. But I'm asking you this afternoon, what about collective culpability? How are we as a society going to answer this question: How have we come to this? Are you worried about backlashes? Rupert Murdoch has this morning tweeted, "Maybe most Muslims are peaceful but until they recognise and destroy their growing jihadist cancer they must be held responsible". So, has this backlash already begun? And if you were a newspaper editor would you publish the controversial cartoons of Mohammad? Does free speech come with a duty of care or, in your mind, is it one of those absolutes?

Yep, 'backlashes' and an invitation to Any Answers? listeners to 'backlash' against BBC bogeyman Rupert Murdoch. You can't say the BBC don't strive for consistency.

[Incidentally, that tweet from Rupert Murdoch didn't go down well with Hugh Sykes either. He's been busy re-tweeting attacks on him for the past two days.

Anita Anand later read out an email from a listener denouncing "racial hatred" from those criticising Muslims and then, rather gratuitously perhaps, suggested he must be talking about Rupert Murdoch].

Most of the callers (and the emails read out on the programme) were strongly against Charlie Hebdo and sang, so to speak, from the BBC's (multifaith) hymnbook.

Anita Anand listened patiently to them, or put quiet counter-points to them, all very politely.

Even Alex from Brixton, who made a series of 'controversial' comments from the 'aggrieved' BAME 'camp', was treated with great respect and told at the end that his was "an interesting, very interesting call. Thank you". To me, though, he sounded as inflammatory as the 'controversial' gentlemen from the other side of the argument who I'll be coming to shortly.

A lady from Maidstone who called the cartoonists at CH "bully boys", "these men, these so-called men" and said they had "no compassion and sensitivity", was allowed to get away with such outrageous comments. I'd have though that some polite variant on "They've just been fucking murdered. What the hell are you on about? Shouldn't you be insulting the terrorists instead?" would have been in order at that point. No such challenge came.

The contrast between all of that and the way Anita Anand treated the two callers who made 'controversial' comments attacking political correctness, Islam, weak politicians, Muslims, etc - i.e. those who most definitely weren't singing from the BBC's (multifaith) hymnbook - just has to be heard to be believed (if your blood pressure can stand it.) The contrast could hardly have been starker.

"Whoa! Whoa! Whoa!", cried Anita, crashing in for the first of several hostile challenges to Tom from Wales. And David from Cheshire fared no better, being asked "What are you talking about?", and being given the full 'appalled voice' treatment from the presenter.

Now, yes, some of their comments - of the kind you regularly read on websites like The Daily Telegraph, The Spectator, Biased BBC, Breitbart, Is the BBC biased?, etc - were 'controversial' and, to my squeamish tastes, went rather too far (especially David's), but it strikes me as noteworthy that they provoked such a hostile reaction from Anita Anand (with interruption flying around wildly) while the no-less-'offensive' remarks from the pro-Muslim, anti-Charlie Hebdo callers aroused no such hostility from the presenter.

Any Answers? is a forum for hearing robust public views. Not one of these callers should have been excluded. Anita Anand, however, could have tried much, much harder to treat such people in an even-handed fashion, challenging all sides where appropriate and not allowing her own feelings to overpower her. Unbiased broadcasting, it wasn't.

[Of course, the BBC could always give up its unrealistic demand that broadcasters must hide their own opinions - and the pretence that they always do. It could give them freedom of speech, so that we know where they stand. To do that, of course, it will have to recruit presenters from a whole range of views and ensure an even spread of opinions from its presenters. Let them express those views during those programmes whilst still obliging them to be as fair as possible, and as respectful as possible - unless those speakers are anti-democratic.]

Returning finally though to question of the programme's vetting and the strange imbalance of opinion against Charlie Hebdo that resulted: There does still remain open the option of believing that it's a bit of a conspiracy - that the Any Answers? team weed out most of the voices they judge 'too dangerous' to broadcast, and put forward instead those callers and emails that take a line that agrees with their own.

After all, we know that it's not always conspiratorial to think like that, because it actually used to happen on Any Answers? We learned from Stuart Prebble's report that the programme did behave like that in the past, if you remember this passage from that BBC-commissioned report back in 2013:

This was said to be partly a fear of having views that were considered unacceptable on the programme, and partly an understandable fear that contributors might go too far and say something which would cause offence – or indeed break the law. Andrew Green [of Migration Watch] would no doubt say that someone who argues against immigration levels should not be presumed to be racist, and he would be right. However, even regular and experienced contributors can say things live on-air that they might not say if given time to consider, and perhaps it is not surprising that hard-pressed producers would err on the side of caution and filter out views which might easily trip over the line of acceptability. The difficult question is always about where that line should be drawn.

Well, at least them allowed Tom and David on.
Posted by Craig at 12:54