It's the way she tells 'em 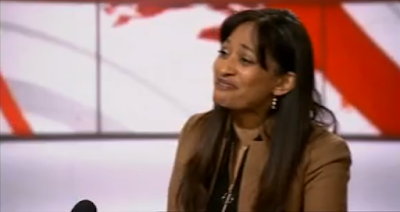 Following on from a post earlier today (to narrow it down, this one: Some people might say...)...
BBC One's early evening news bulletin stuck with the BBC template of the day with Clive Myrie introducing the CPTPP story and asking Dharshini David (in an incredulous tone of voice) "We have just left the European Union, now we want to join another trading block?"
That question struck ex-MEP Roger Helmer (watching and tweeting) as a very poor one:

For heaven’s sake, after the Brexit saga do they still not know the difference between an FTA and a political union?

Dharshini, probably not giving Roger's non-BBC groupthink distinction even a second's thought and evidently being very fond of her joke from earlier, responded "And one with an even less catchy name, of course, Clive".
A career in Radio 4 comedy beckons.
*******

Immediate Update: And it continued on the BBC News Channel later, though with a different newsreader, Lukwesa Burak.
(Clive Myrie had probably slipped out to the morgue again).
And Lukwesa's question to Dharshini, again adopting an incredulous tone of voice as if it's something laughable that's being mooted, said "We've heard Liz Truss there. Very hopeful. BUT....We've just left a huge trade bloc and we're applying for another!?"
Dharshini, adopting an even more incredulous tone of voice, replied: "We've just left one that's literally on our doorstep [ed - that "literally" is questionable] and we're talking about applying to one that's thousands of miles away! And it has a far less catchy name than the EU as well"....
....at which she laughed. At her own joke.
They really aren't that keen on us joining the CPTPP. Or leaving the EU. They're never going to get over it, are they?
P.S. Please also see earlier comments here.
Posted by Craig at 19:24