Thou hypocrite, first cast out the beam out of thine own eye; and then shalt thou see clearly to cast out the mote out of thy brother's eye

The BBC's main defender in print, The Guardian/Observer, has a piece today that comes out very strongly against Andrew Neil & Co. and their new television service(s).

The first witness it calls in opposition to Andrew Neil's GB News (and another new service) is none other than the BBC's Jon Sopel.

The Observer introduces his contribution by saying that he "sees the promised channels as a greater potential threat to democracy than Britain’s already openly biased newspapers."

And what is Jon Sopel then quoted as saying by The Guardian/Observer?

Well, he's quoted at some length but I can sum it all up in a few words: He thinks that he's getting it about right, and that the BBC and the other existing main UK news channels are also getting it about right. Why? Because, he says, he and they seek to be 'fair' and 'balanced' and don't propagandise.

And pull the other one!

I'm surprised Andrew Neil hasn't commented on this on Twitter yet, as far as I can see (and I've checked). Wonder what he thinks of Jon Sopel's appearance in this anti-GB News piece?

UPDATE: On a related theme, and fresh in...SHOCK NEWS!!! The Guardian (which 'some say' is the inky wing of the BBC) comes out in favour of the BBC: 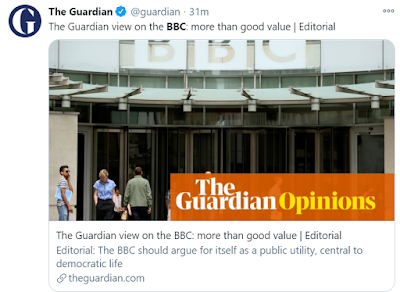 Martin Daubney: Absolute cobblers here from BBC’s North America Editor who sees new British TV channels as a “threat to democracy”. If the BBC & the rest had been impartial over Brexit/Trump/COVID we might not need alternatives. Bring it on - and let the market decide!
Ella T: The BBC's Jon Sopel said what? Can there be a more biased, warped individual reporting from USA than him? The gravy train for him and his ilk is coming to an end.
Richard Hammonds: Sopel has been a Trump hater from day one. Every single report he makes is negative biased and twisted. Just watch him about turn into the 'love-in' mode for Biden. Utter garbage is the BBC. It is now a propaganda unit not a news outlet.