Lukwesa is the bearer of good tidings 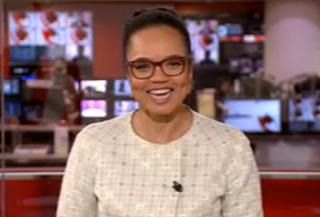 Straight after Dharshini's latest performance on the BBC News Channel, Lukwesa turned to something completely different.

And I've never seen a BBC News Channel newsreader look so happy about announcing something. She beamed with what looked like delight, and her voice became excessively loud and giddy with seeming excitement.

Now what could have so lifted Lukwesa's face and voice into the stratosphere and beyond? Well, a bit of identity politics, that's what!
The actual words really don't do justice to just how over-the-moon she gave the impression of being. (Of course, she could have been faking it). It was quite startling. That woman in the big pink frock on North Korean news couldn't have looked happier if Kim Jong-un had opened a new nuclear weapons factory.
Anyhow, here's the news wot did it:

The UK's largest umbrella organisation for Muslim groups has elected a woman as its head for the first time.

Zara Mohammed, who has a background in human rights law, is not only the first woman in the role, she's also the youngest.

She said she hoped her election as Secretary-General of the Muslim Council of Britain would inspire more women and young people to come forward to leadership roles.

Not only is she the first woman in the role, she is also the youngest and the first Scottish person to be Secretary General.

Great honour to say that the new Secretary-General herself, Zara Mohammed, has joined us here on BBC News. Thank you for joining us, and huge congratulations to you.