On a day when I’ve turned off the wall-to-wall derogatory remarks about Trump.

On this day etc., as above. 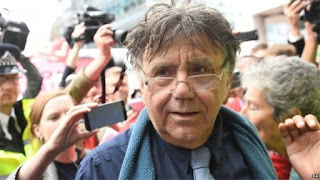 “It’s almost certain who is behind all this anti-semitism against Jeremy... Almost certainly it was the Israeli embassy. “


That’s what Pete Willsman said. Or, to be more precise, that is what the BBC said he said.

One’s first thought (mine) is why on earth is this inarticulate man even on Labour’s NEC? Did people actually elect him?

Furthermore, “.....antisemitism against Jeremy” doesn’t even make sense. Was the antisemitism directed at Jeremy who has suddenly discovered that he himself is a Jew? No, but wouldn’t that at least be a laugh?

Making allowances for the garbled language, we all know what this man meant. But was it antisemitic?

Arguably, the Israeli Embassy has plenty of very good reasons to discredit Jeremy Corbyn, since the Labour Party has promised to bring in all sorts of damaging policies once they’re in power. So, there’s that.

But once one suggests that the Israeli Embassy is making unfounded accusations of antisemitism solely to 'smear' Jeremy, then that is the kind of ‘gaslighting’ that falls into the IHRA official definition of antisemitism. If this is what Willsman has said, and it seems it is, that puts his remarks into the category of antisemitism.

The BBC’s header conceals multiple offences. For a start, compare it with Sky’s header, which comes straight out and calls Willsman’s remarks “an antisemitic rant.”

The BBC holds back on the value-judgement-laden word ‘antisemitic’ taking a step back and choosing to refer to the aforementioned antisemitic rant as “antisemitism remarks”.

In other words, Sky clearly commits to defining Willsman’s remarks as “antisemitic” whereas the BBC sits on the fence, primly sticking with a pretendedly disinterested description of Willsman’s ‘antisemitism’ remarks  - namely, his remarks about antisemitism (translated from the original BBC-speak.)

Anyway, for their web article, the BBC chose just a selected excerpt from the offending remarks, as according to Sky he said a lot more:

"And one of these things about antisemitism is that they're using that to whip people up. They'll use anything - any lies. It's all total lies and they just whip it up.

"I'll tell you what - and this is off the record. It's almost certain who is behind all this antisemitism against Jeremy, almost certainly it was the Israeli embassy, because they caught somebody in the Labour party, it turns out they were an agent in the embassy.

"One of them works indirectly for the Israeli embassy. I wouldn't want to be bothered to find out but my guess would be they're the ones whipping it up all the time."

He went on:
"In the Guardian not long ago we had 68 rabbis - obviously organised by the Israeli embassy - saying antisemitism in the Labour party is widespread and severe.”

Why am I bothered?

Well, I’m afraid I’ll have to go back to the episode of Any Answers that Craig examined here
To my mind, Melanie Abbott's handling of the first item on the Any Answers agenda was equally, if not more appalling than the one Craig dealt with.

Ms Abbott’s voice may be less irritating than Anita Anand’s, but judging from that one episode, where Israel is concerned she is BBC through and through, i.e., hostile to Israel and all who sail in her.  Do give it a listen or if you've already done so, another one. It's the first item.

The first caller, ‘Jane from Liverpool’ struggled to make her point, but she managed to convey quite clearly that she found it all the more appalling that Peter Willsman was no ordinary three-quid Labour Party member, but an elected member of the NEC.

During her faltering contribution, Ms Abbott unhelpfully interrupted this caller twice, firstly challenging her allegation that Willsman is “part of Momentum”

“We don’t know that”

Well, yes, but we do know that Willsman did indeed have a relationship with Momentum in the past because that organisation publicly disowned him when he was originally suspended for his unfortunate remark about Jews being Trump supporters. One would hope that this would have been known to Ms Abbott since it was well covered by the Guardian. She had plenty of time to gen up on these things I’d have thought, and hardly worth an admonishment-like challenge.

She interrupted again, diverting the caller away from ‘the Palestinian cause’ and steering her towards the expulsion of Alistair Campbell.
“We don’t know” whether or not Willsman’s recorded rant “could have been doctored,” said Ms Abbott.
Was she really trying to fudge the contrast between Campbell’s rapid expulsion and Willsman’s mere ‘suspension’? It sounded like it.
As for speculation about the veracity of the recording, well, I think that theory is attributable to Lord Falconer and was also covered in the Graun.

Incidentally, before his initial reinstatement Willsman is said to have gone through ‘antisemitism training’.  That must be effective!

Next, a caller named Dave Whetton from Tunbridge in Kent. Dave’s rant came well within the terms of the IHRA definition of antisemitism, but Melanie Abbott gave him free rein to whine, even allowing him to cite, nay, recommend, Al Jazeera’s’ The Lobby’ unchallenged, and (with one cautious exception) virtually uninterrupted.

Dave
“Well it’s all gone very hysterical, you know, you know, anyone who attacks Israeli gov’ment is antisemitic. Um, I would suggest that anyone, any listeners, tune in to Al Jazeera - er - The Lobby, it shows exac’ly what’s been going on with any infos(?) direc’ly from the Israeli Embassy in this country to undermine any future Labour gov’ment in this country.”

MA
Well, we can’t stand by that; we, we don’t know if that is actually true…

Dave
Well I would ask a consistence(?) of people, How likely is it that the Israeli gov’ment isn’t involved with trying to undermine a Corbyn gov’mnt because they know that he supports, he and the Labour Party, support the Palestinian cause. Now, on the programme Lord Falconer said you can support the Palestinian cause without being antisemitic. Of course you can, but it doesn’t mean to say that you’re not gonna attack the Israeli Govenmnt in the process. For what they’re doing out there in occupied lands.

MA
Dave thank you for that I’d like to bring Ian Brothwell in from Nottingham; Ian what’s your view of what’s going on with the Labour party?

IB
Well it all seems very confused and i think headless chickens comes to mind.

IB
Um in the EU election I didn’t vote labour or Conservative because I couldn’t get a clear idea of whether they were for or against Brexit….

He went off topic but was gently guided back with a question about the way Alistair Campbell has been treated.
Ian feels sorry for Big Al because he’s been such a long-standing Labour Party supporter.
Abbott quotes from a rule that states that a member who supports another political organisation shall be ineligible to remain a party member. Then:

“Dave, what do you think about the way Alistair Campbell’s been treated”

So Dave is still on the line! Apologies for the words I couldn't catch; his diction wasn't up to much.

"I think it’s silly. They should have given him a slap on the wrist and have done with it. you know, because it can’t help but be compared with the suspensions. This is what’s going on. The media’s focusing on and all the anti-Corbynites are focusing on. So it was a silly thing to do. Slap on the wrist and vote properly next time Alistair, Everyone’s entitled to change their vote, so many people did it this time, you know voted Green or LibDem, who normally, when it comes to a big election,
would vote for the two big main parties!

MA
Dave and Ian, thank you both for that. I would like to move on now.

Finally, I fell upon an article on Swawkbox (I know) and amongst the b.t.l. comments (mostly defending Willsman) I spotted one that said something like:
“And all on the day when BBC Radio 4 highlights Israel’s inhumane denial of exit permits to Gazans who need hospital treatment”.

That’s how fake news works. And all on the day when there's nothing but wall-to-wall disparaging coverage of President Trump's belated state visit to the UK. I thank you.