I read recently that Radio 4's newish boss chose Grayson to deliver these prestigious lecture as part of his bid to rid the network of its stuffy image.

Well, Grayson is certainly the frock-wearing guy to blow away a few odorous Reithian cobwebs.

His first lecture today was far, far away from the tone and spirit of any other Reith Lecture I've ever heard. Any Reithian spiders in earshot will have scuttled away into the BBC's environmentally-friendly coal-sheds within minutes.

That's not necessarily a bad thing, by any means.

I warmed to his early announcement that:

I'm not going to live up to sort of like the Reith lecturers' code of honour, which is to have definite, strong opinions and be a kind of certainly freak.

I will admit, however - as a ferret-obsessed, Northern, working class reactionary - that I feel somewhat removed from the modern art elite Grayson Perry critiques. So I like the fact that he critiques it. [I'm someone who likes their paintings to depict realistic ferrets - and nothing but realistic ferrets. {I am joking, by the way, there}].

Grayson himself is, however a part of that very modern art world - a former Turner Prize winner himself - however much he strives to keep himself at a distance from it. Hence, a certain double-edgedness to his idea-rich, fast-tumbling, amusing, stream-of-consciousness-sounding lecture.

Many of his points rang true (and made me laugh), even though he - and his adoring audience [present in  the Tate Modern arena] - felt only a little less removed from me than that alien-seeming modern art elite.

Still, who could resist this?:

In my second year at art college it was almost de rigueur at that point that you had to dabble in performance art. This is 30 years ago. This is the thing you had to do. Performance art. You know, cover the bases. So I did a little free act performance. I started off by being a kind of naked guru with a chastity belt which people had to come and worship.

And then the second part was a lecture I gave - a sort of facetious lecture, because they were very Marxist intellectuals in our college, so I was taking the piss out of them, so I did a whole lecture about the fact that 'art' was an anagram of the word 'rat'.

And much as I'm an enthusiast for Cezanne, I had to grin at the accuracy of his verdict about a particularly famous Cezanne painting:

Of course, the nearest thing we have to an empirical measure of art that actually does exist is the market. By that reckoning Cezanne's Card Players is the most beautiful, lovely painting in the world, I find it a bit clunky, kitsch, but that's me. $260 million it's worth. 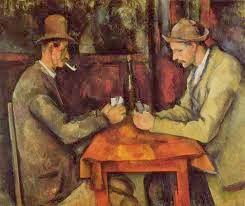 And I shared the audience's amusement at his gossipy [and possibly not genuine] story about Tate Modern supremo Sir Nicholas Serota:

I live round the corner from Sir Nichola Serota, director of Tate....a very distinguished curator as well....I was round his house one day and I was lucky enough to see his world-class collection of Cliff Richard memorabilia.

Being able to criticise the modern art world and wear a colourful frock at the same, and not forgetting to have a few jokes at the expense of bankers (etc), Grayson Perry is ideal Reith lecturer material for a new-look, hip-'n-happening BBC Radio 4. His lecture had something of the feel of The Now Show.

I enjoyed it, but the ideas flowed so thick and fast that it was hard to tell if they actually flowed, or cohered - hence my perception that it was a stream-of-consciousness lecture.

The audience questions that followed were from a wide cross section of the public the usual crowd of BBC arties - begining with ultra-pretentious former Newsnight Review regular Ekow Eshun [the man who finally put me off watching that show], continuing with writer Kate Hardy, following her with a snoozeworthy Nicholas Serota [of Cliff Richard fame], then linguistic anthropologist Barbara Clark [who wonder if he makes pots "for poor people"], author Will Self [asking a question of such pretentiousness that even Ekow Eshun must have been thinking, "Jeez, what a pretentious question!"], a pompous art historian called David, and, last and very possibly least, Guardian writer Miranda Sawyer [another former Newsnight Review regular].