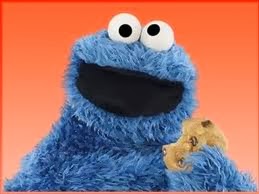 Following the Cookie Monster's appearance on Newsnight news has come through to us that he will soon be joining the ever-growing list of celebrities to appear on BBC One's Question Time.

We at Is the BBC Biased? have acquired a transcript of part of that forthcoming edition of the programme: