"The crucial thing is that yer live and let live, isn't it?" 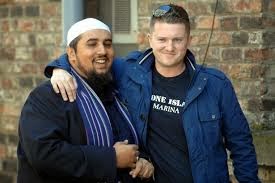 The aforementioned Sunday Morning Live partly followed its usual pattern of juxtaposing sharply opposed points of view, and hoping that some light comes out of the inevitable heat. I think some light did come out of the heat of this edition.

The opening subject (and the subject of the viewers' poll that saw 95% saying 'yes' to the question), was "Does the English Defence League represent a view that needs to be heard?", and it pitted the former EDL leader Tommy Robinson against former Muslim Council of Britain spokesman Inayat Bunglawala.

Although placed on an end chair, Esther Rantzen was (metaphorically) positioned between them.

There were only two Skype/phone guests - Jamie Barlett from the Demos think tank and Usama Hasan of the Quilliam Foundation - because, unusually, this segment was dominated by presenter Samira Ahmed's questioning of Tommy Robinson.

Jamie Barlett expressed caution about Tommy Robinson, while Usama Hasan was warmly welcoming of his move.

Like Sue, I think Samira tends to be pretty even-handed during most editions of Sunday Morning Live, but here she clearly applied most of the pressure to the ex-EDL man, making this segment half-a-discussion and half-an-interview.

The discussion itself was preceded by a short commentary from Samira, in the course of which it again became clear [as it did on Newsnight last week] that Tommy Robinson's decision to leave the EDL and to work alongside Muslim groups like the Quilliam Foundation was brought about partly through the agency of the BBC itself. The corporation had invited him to take part in a BBC documentary. During it, he was encouraged to engage with members of the Muslim community. He did precisely that, and the consequences are now known to all. Should be BBC be seen as a godparent to his decision?

Tommy Robinson made many points on the programme which must have struck a chord with many viewers - if the results of the viewers' poll are anything to go by.

He must have made a better impression than Inayat Bunglawala, who came across as a nasty piece of work - especially for his unpleasant, unprovoked attack on Usama Hasan [ironically after Usama had just praised all three guests for discussing the issue in a civilised manner.]

Esther probably imagined herself to be playing the part of 'the voice of sweet reason', saying lots of nice things about how lovely it would be if we were all able to get along with each other, but, alas, she came across as being charmingly out of her depth (without realising it). For those of you who can't face watching the programme (unlike Sue and myself!), here's a flavour of Esther's contributions:

"If you two gentlemen can get together I see hope for the future."
"The crucial thing is that yer live and let live, isn't it?"
"You both need more women in your various...nice sane women whose focus is that their children can grow up in peace and prosperity."
"What you have in common is so much more important that what divides you".

She also clearly hadn't paid much attention to this week's news, asking all kinds of naive questions. She was obviously winging it a bit.

After the results of the viewers' poll were announced, Tommy returned to join Esther and another guest, journalist Kenan Malik [another critic of Tommy Robinson]. Samira grilled Tommy Robinson again.

The other topics discussed were press regulation and care for the elderly.