Thanks for the Memri

The Telegraph is almost as obsessed with BBC bashing as the Daily Mail, but I regard neither of them as a friend, as in my enemy’s enemy. For a start, Peter Oborne is a prominent Telegraph columnist with an irrational hatred for the dastardly Israel (Jewish) lobby, but on the other hand the Telegraph does ferret out a lot of gossip about the Beeb, as does the Daily Mail.

However, the Mail no longer boasts Melanie Phillips as a regular columnist, and rumour has it that she was given the heave-ho after her controversial performance on Question Time, where she famously ‘lost it,’ having been provoked, understandably, by the audience’s ignorance and naivety.


I revisted this incident through this 17th September article by the Spectator’s Steerpike.

One day it will be classic ‘ I told you so’ material.

I suspect the audience’s skepticism was largely because they find the beliefs that motivate religious fanatics that rule countries like Iran bizarre and beyond implausible. Don’t we all.
Obviously they didn’t like being called ignorant either, when they didn’t even know they were, and especially because their ignorance was arguably through no fault of their own, since the BBC’s remit (to educate us) has fallen short.  Well, that and their lack of curiosity about the Shia Mahdi and so on.

Due to the BBC’s lack of interest in this subject, both the BBC’s audience and employees haven’t the imagination to realise that everyone isn’t just like them and their secular,  right-on left-leaning circle.
The majority of BBC journalists see all individuals, even those in far-flung Islamic states, through a Western, lefty-liberal prism. They relay statements from fanatical Islamists as though they were straight from the man on the Islington omnibendybus. In other words they can’t digest the concept that Allah looms large over whatever most of them think, say and do.

There is a huge hole in the BBC’s reporting when it comes to things like incitement in the Arab world, and if Peter Oborne is so keen to warn us about the dangers of the Jewish Lobby, why isn’t he, or someone equally jowly, just as eager to make the world aware of the rabid hatred for the Jews and Israel, and even more unpalatably to Telegraph readers, the West, that is proclaimed loud and clear on televisions all over the Arab world and translated by Memri for the edification of those who wish to know. 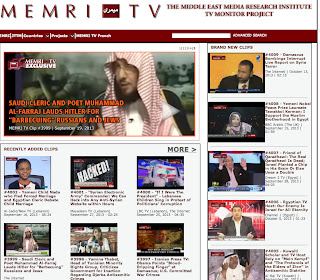