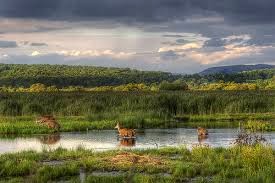 OK, this blog is basically about banging on about BBC bias (and using plentiful alliteration in the process), but I'm watching Autumnwatch tonight on BBC Two, and they are broadcasting from my beloved Morecambe Bay....and I want to recommend it to you.

[I don't work for the local tourist board, by the way].

Chris Packham & Co are based at one of my favourite places - the nature reserve at Leighton Moss.

There you can hear bitterns booming, watch starlings whirling in the air, spot a stag (if you're staggeringly lucky), wander up to stately Leighton Hall (where Batman's butler Alfred learned his trade), or lurk in the lodge, prying into the tawdry affairs of sundry migratory birds as they sit and squawk on the lake.

As I'm typing, Martin Games-Hughes (he of that laugh) is watching the starlings rotate above the reeds at Leighton Moss - and enthusing, as BBC presenters are prone to do (understandably).

I myself was watching a small squadron of these very starlings around three hours ago, from our upstairs window, on their way (I presume) to Leighton Moss, as they began their magical flurry. I was also watching them at the weekend swirling in the surprisingly warm afternoon air over the Lune estuary, whilst chomping on a sandwich and a bowl of chips, and downing a glass of wine [me, not the starlings that is], at my favourite local hostelry. [How many other blogs about BBC bias would share such intimate moments with you?]

The main theme of this series of Autumnwatch is migration. Not immigration, of course. [Nod to  a BBC bias issue? Tick.]

Oh dear, two cheerful, go-BBC posts in a row. What about the BBC bias, you may ask? The real BBC bias?

Well, the programme is now talking badgers - and the controversial badger cull. It's strongly biased in favour of the badger - taking a 'badgers good, humans bad' stance. Tut, tut, and on a controversial issue. Ergo, BBC bias. [Phew, that was close!]
Posted by Craig at 20:43