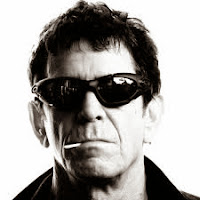 I don't know about you but wherever I seem to have turned in the last few days - whether it's the BBC's Today programme or the Daily Telegraph website or NotaSheep's blog - it's been Lou Reed all the way.

The late singer-songwriter's demise has sparked a considerable amount of interest and comment.

I will admit, however, to being mostly unfamiliar with much of Lou Reed's music.

I knew - on a quiz-goer's level - that he was the Velvet Underground guy - and that Velvet Underground did I'm Waiting For My Man - and, of course, I knew and liked Lou Reed's big solo hit 'Walk On The Wild Side' [though, rather like a stereotypical judge, I'd never picked up on the use of the word 'head' in the song], and I fondly remember Lou's namesake Oliver 'covering' this very song so enthusiastically [hic] on Wogan - which, as Grayson Perry might say, was art. [It was Walk On The Wild Side, wasn't it?]

The last few days, however, have brought to my notice Lou's original version of Perfect Day, so perfectly sung. I've never heard it before, yet have completely fallen in love with it.

Now, ol' Lou was [it seems] quite a character, and not an easy character. James Delingpole's blogposts about Lou Reed in recent day (and, yes, James interviewed him), have been fascinating - and somewhat surprising.

I've seen lots of deeply admiring writing about Lou Reed (including from NotaSheep) and quite a lot of negative comment too, but I was quite staggered [hence, feeling the need to blog about it] by a piece in the Daily Mail entitled [at length]:

A VERY debauched walk on the wild side: He did more than any other rock star to give drugs a false and dangerous glamor [sic]. Now, after a liver transplant in May, Lou Reed's own excesses have finally caught up with him
By TOM LEONARD

Just a few hours after Lou Reed's death, Tom Leonard felt it appropriate to post an unremitting sneer at the singer.

Even someone as fairly unfamiliar with Lou Reed as me could see that this was was a paint-the-dots hatchet job-attempt.

I'd read about the 'Perfect Day'-Susan Boyle affair, for example, and knew that Tom was blagging.

Tom Leonard says that Lou Reed made Susan cry by refusing to allow her to sing the song:

He reduced the Britain’s Got Talent star Susan Boyle to tears in 2010 after he refused to let her perform Perfect Day on the America’s Got Talent TV show.

Wikipedia, however, notes that's there's much more to the story than that:

In September 2010, Susan Boyle had to cancel a performance on America's Got Talent at the last minute. She had planned to sing "Perfect Day", but two hours before the show, she was told that Lou Reed had intervened, refusing her permission to perform his song and to include it on her forthcoming album The Gift. As she and her choir didn't have time to rehearse another number, she decided to cancel her performance.

A couple of days later, representatives of Lou Reed stated that he had nothing to do with the decision and that it was just a licensing glitch.

A couple of weeks later, Lou Reed agreed not only to let her include the song on The Gift, but also to produce her music video of the song. It was shot on the banks of Loch Lomond and premiered on 7 November 2010.

Clearly, Tom Leonard cast this story in the blackest possible light and omitted all the subsequent part of the story where Lou Reed appears in a good light - indeed, as  the perfect gentleman - presumably because that didn't fit his chosen angle.

Compare that with Neil McCormick's take on the same song at the Telegraph:

In the era of Sergeant Pepper and flower power, The Velvet Underground’s seven minute, two note drone about shooting up, speeding drug rush followed by grinding come down, feels like an extraordinary slap in the face to hippie drug culture. “Heroin will be the death of me,” sings Reed, who could never understand how the song might be misinterpreted as a pro-drug anthem.

I can quite understand, by the way, why Neil ranks that as the most 'essential' of Lou Reed's tracks. It's a fine example of youthful, Schubert-like genius.

Thankfully, all the top-rated comments below Tom's post take him to task, with a vengeance - and, in fairness to the Mail, they allow that to happen without censorship. [BBC moderators, please take note].

I have to say I'm old-fashioned in my belief that (unless it's Hitler) you shouldn't speak ill of the dead, within hours of their death at least.
Posted by Craig at 22:47