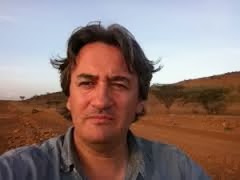 Much as might be expected from Fergal Keane, it was a tale of wicked Western imperialism, British duplicity, unlucky Arabs, well-connected Zionists, and hard-done-by Palestinians.

There were three 'talking heads':

James Barr, historian, author of A Line in the Sand and an expert on Anglo-French rivalry in the Middle East.

Avi Shlaim, anti-Zionist historian at Oxford University and regular writer for the Guardian's Comment Is Free.

So, besides Mr Barr (who concentrated on the Anglo-French rivalry aspects of the story), the expert guidance sought by Fergal Keane for this episode of the series consisted of a left-wing, anti-Zionist Israeli historian and an Edward Said-influenced American professor with Palestinian roots...

...which are just the kind of experts you would expect Fergal Keane to seek out, if you suspected him of having an anti-Israel bias.
Posted by Craig at 19:39