I didn’t see the debate “should British women wear the niqab.” on Channel Four when it went out, but I watched it online.

The debate had Douglas Murray in it for goodness sake. And Yasmin Alibhai Brown!

I won’t let the fact that this was a Channel 4 programme, not BBC, deter me because, well,  it was so bizarre. To me that is; someone who hasn’t had to internally normalise mingling with and living happily amongst slow-moving tents while pretending it’s o-politically correct-kay.
No, living in the sticks, I don’t have to bother about mingling with the multicultural. I just have to mingle with the multifaceted.The tattooed, the pierced, the clinically obese and the unemployable as well as the Guardian-reader, the alternative lifestyler, the all-over denim wearing perpetual student and the healthy, wealthy and wise; the butcher, the baker and the candlestick maker. Personally I come somewhere in between none of these.
Anyway all these people do like a uniform of some sort, so why, one might ask, should one object to the niqab?

The reason I object to it is because the uniform represents hatred for me, openly displayed under the protection afforded to “religious ‘faith’”.
Fatima  Barkatullah (haha) and her shrouded sisters are wearing it “as a way of asserting a Muslim identity they feel is under attack” and while they’re at it, advertising the fact that the Gods and messengers they worship deem me inferior because I have descended from the ape and the pig. Just think; if devout Muslims, who have an even more stringent dispensation from behaving normally than ‘moderate’ Muslims, are forbidden to teach children the sound of the letter ‘P’ by using the word ‘Pig,’  what would they be teaching their children about me and my porcine origins if they can’t even bring themselves to utter the word?

They are going round ‘in yer face’ wearing the symbol of antisemitism with impunity. Provocative and taunting, and that’s why I object. I hope that’s clear. Never mind whether or not these deluded semi-articulate Ali Gs are empowered and liberated. Who cares?

What I really wanted someone to ask was, why? Are you serious? How long do you think you can get away with claiming this joke outfit is anything other than ridiculous?

Your eyes darting from side to side look exactly like cartoons of ‘blinking in the dark’. Where’s Minnie Mouse? Some of you even wear back gloves, like those camouflage art-works where people are disguised as the background and made invisible. 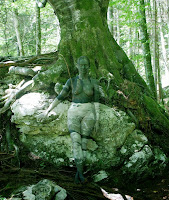 What a bloody cheek! Why do they ever in this world think going round draped in material brings them closer to God, with their ridiculous penis-shaped heads and their yash-mak nose-bags.  The sight of the apparition in pink cloth, momentarily inhaling her niqab while attempting to communicate and appear normal at the same time was comical and sinister.

Remember that documentary with Stacey Dooley about fanatical Islam in Luton all those years ago when Tommy Robinson was just a spark in the EDL’s eye? I’ll always remember the scene where she was sitting at a table in a cafe with  some of her black-tented former school-mates trying to ‘understand’ them. Set before each of them on the table was an enormous slice of cake.  I waited apprehensively to see how they would overcome the logistics. Nothing happened.

Douglas, that’s the first time I’ve seen you defeated. You were defeated by the inanity of the opposition. Too inane to get to grips with. Beyond parody. You should have offered them cake.