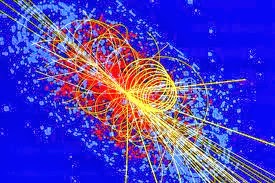 On the day that an OECD report highlighted the poor levels of numeracy and literacy among English 16-24 year olds and observed that school leavers today have lower levels of basic skills than their grandparents, it was simultaneously heartening and disheartening to hear that someone from the good old days of English numeracy and literacy has won this year's Nobel Prize for Physics - namely Peter Higgs , the man who predicted the Higgs Boson (finally shown to exist by CERN last year), the elementary particle, popularly known as 'the God particle', which completes the periodic table of elementary particles necessary to back up the preferred theory of modern physicists - the Standard Model of particle physics.

I was glad that both the BBC and ITV's most popular TV news bulletins gave time for this wonderful story tonight.

I did note, however, that the report on the BBC's News at Six said it was controversial that the scientists at CERN hadn't also been recognised by the Nobel committee. ITV's Lawrence McGinty, however, observed that there's a simple reason for that: The Nobel prize is given to individuals, not to a vast commune of scientists.

Less pleasing though was the fact that the main TV news bulletins of both broadcasters failed to cover yesterday's awarding of the Nobel Prize for medicine to three scientists - James Rothman, Randy Schekman and Thomas Suedhof - "for their discoveries of machinery regulating vesicle traffic, a major transport system in our cells."

According to the citations, Professor Schekman found a set of genes needed for vesicle traffic, Professor Rothman found the protein machinery which permits vesicles to fuse with their targets to allow the transfer of cellular cargo, and Professor Suedhof discovered how signals tell vesicles to release their cargo with such precision.

What they discovered ultimately matters much more than who got reshuffled where in the cabinet and the shadow cabinet. It offers hope for sufferers of Alzheimer's, autism and diabetes.

The neglect of that story can probably be put down to the general undervaluing of science by the arts/humanities-dominated media world. I'm sure viewers [speaking generally] would have been interested in hearing about what those three men discovered, and what their discoveries could mean for us all.

Still, a Lib Dem moved here and a shadow cabinet minister moved there is what seems to excite UK broadcasters more - and, as they are doing the broadcasting, that's what we get as a  result.

Unless a Brit wins of course. [Hurray!]

Incidentally, for fans of physicists' humour, here's a oft-told joke about the Higgs Boson:


A Higgs Boson walks into a Catholic Church one Sunday morning. The priest looks up from the altar, sees the boson, points to the sanctuary door, and yells, "We don't allow your kind in here!"
The Higgs Boson protests, replying, "But Father! You can't have mass without me!"


Update: Oh dear, the crazy world of quantum physics has nothing on the crazy world of anti-Zionism. It turns out that Prof Higgs is an opponent of academic freedom. Yep, he's a boycotter of Israeli universities on the usual political grounds. FFS.
Posted by Craig at 21:27