Paul Danahar’s appearance at the Frontline Club on October 15th is the subject of articles at BBC Watch and Daphne Anson whose blog contains a video of the the whole session.

Given the prevailing scale of expectations, where the bar is set from low to lowest, his throwaway observation about ‘understanding’ Israel caused a minor sensation.

In honour of his book “The New Middle East”,  Paul Danahar answers questions posed by Sam Farah of the BBC’s Arabic service, and afterwards from members of the audience.

His style is Bowenesque, as I suspect is his interpretation of Middle Eastern affairs. The analysis has a cartoon-like simplification, perhaps to suit the Q & A format. For example as Hadar points out,  “his claim that the focus of the Arab-Israeli conflict has shifted from being “about land” and “about borders” to “about God”  sounds decidedly sloppy. It ignores the fact that the ideology of Israel’s enemies is the motivating factor behind their rejectionist position, and always has been.

Just before the end, Danahar made some uncharacteristic comments on the subject of understanding Israel.

He said something like: You can’t understand Israel and why the Israelis do what they do if you view it only through the prism of the Israeli-Palestinian conflict.

One might think throwing a fairly modest crumb at the Zionists was the least he could do, if only to demonstrate that he had something to show for all the time he spent as chief of the BBC Jerusalem Bureau; but since his stance, particularly on Gaza, had been patently “BBC”, it came across as an act of unprecedented generosity.
Or is that to misdescribe it, in the manner of Mehdi Hasan describing Tommy Robinson’s career move a volte-face?  I  think it was neither an act of generosity nor a volte-face.

Danahar showed precisely where he and his protégé Jon Donnison stood when he relayed unadulterated Palestinian rhetoric on Twitter at the time of the infamous killing of the toddler Omar Masharawi. 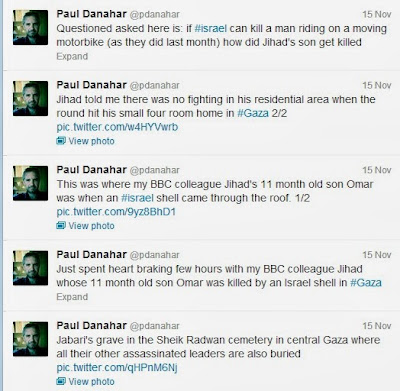 The consensus is now that the missile that killed the child was not an Israeli shell, after all, but a Palestinian rocket fired at Israel, which fell short. This was confirmed by the UNHRC, an organisation not noted for its sympathetic attitude towards Israel.

Having only seen the video of his performance at the ‘left-leaning’ Frontline Club, (and not read the book) I turned Amazon’s “Look inside” feature.
A cursory skim confirmed my hunch that (while we’re on the subject of prisms,) Danahar and the BBC view the Israeli-Palestinian conflict through the same prism, moral equivalence and all. In the introduction Danahar seems to minimise the religiosity that dominates the Arab World and exaggerate the “Just like us” theme that is ever present in the BBC’s M.E. reporting. At the same time he magnifies the threat in Israel from an ominous-sounding and ever increasing ultra orthodox menace. Thus, a superficial kind of moral equivalence is laid down.

Expanding on “you have to live in Israel to understand it” he says growing religiosity and nationalism in Israel puts the country at risk of becoming less democratic, and concludes: “Israel has swung sharply to the right”. The election did not bear that out.

On his current Twitter feed he’s busily promoting the book and saying it has been well received. He might mean the reviews on Amazon, one of which begins: “I started this book with trepidation because of course it couldn't possibly compete with Robert Fisk, 'The Great War for Civilisation' could it?!" (He thinks it does)         Robert Fisk?

The impression is that the analysis is of the Jeremy Bowen school; whole concepts are extrapolated from strings of anecdotes, which I guess is a valid journalistic approach. This review in the Telegraph is positive, with reservations, and I am willing to hear that my negativity is motivated by my own wishful thinking, and that I’m talking crap. I haven’t read the book. I  have merely cherry-picked and, if you like, extrapolated a whole concept from odds and ends. Such as:
Chapter called ‘The Problem.’

This is copyrighted material so I can’t reproduce too much of it, but in the chapter entitled ‘The Problem’ Danahar revisits the tale of Omar Masharawi. He still seems to believe his death was caused by an Israeli airstrike, although by calling it “a stray missile” he does seem to concede that it wasn’t deliberate, as in another example of Israel’s predilection for killing babies.


“The family and human rights groups said it was an Israeli airstrike. Privately, at the time, so too did Israeli officials. Publically (sic) four months afterwards, the IDF said it could not confirm or deny whether it had hit the house. Then in March 2013 the UN human rights Council said it was probably a Palestinian rocket falling short. The next month an investigation by the Israeli Military Advocate General reached the same conclusion. Jehad dismissed the UN claims as ‘rubbish’ as did Hamas. Like much else in this corner of the ME the cause of the fireball that ripped through the family home was fodder for the competing lobby groups and they argued viciously over it. But the effect of the missile was indisputable.”

The Israelis’ initial response mirrors their self-damaging reaction way back at the time of the Al Dura incident. The Israelis should be mindful that their initial (often apocryphally self-incriminating) responses will always be taken down for future use as evidence against them.

I think Paul Danahar was very foolish to use the bereaved family’s understandably subjective opinion, based on nothing but wishful thinking, to rationalise his own ‘gut feeling’ and his contemporaneous, unprofessionally rash Tweets. Even more foolish was he to reference the opinion of Hamas.
The emotive language (fireball that ripped through the family home) sort of tries to guild a wilting lily.  He forgets that ‘emoting’ like that, and all that furious publicising of ‘those’ images can turn into an own goal when the tables are turned. That’s why he’s forced to keep digging in the way he has done here, and notice that the spelling has automagically morphed to a benign ‘Jehad’, from the original 'Jihad' with its unpalatable associations.  Simon Plosker:

"Speaking to the BBC in the aftermath of a UN report exonerating Israel from killing Jihad Misharawi’s 11-month old son, his brother and sister-in-law, Misharawi chose to believe the latter option. Misharawi, perhaps unsurprisingly, restated his belief that Israel had killed his family and claimed that Hamas would have apologized if it had been responsible. As ludicrous as this explanation may sound, is it that surprising coming from a grieving Palestinian father?The BBC reports Misharawi stating that nobody from the UN had talked to him as if this is further evidence of the UN being less than thorough in its investigation. Misharawi is clearly not a munitions expert with intimate knowledge of the forensics involved. So why should the UN regard him as a key witness and why should the BBC regard this as relevant?[…]In the BBC’s usual worldview, the United Nations is regarded as a pillar of propriety and virtue. A UN report (and there are many) criticizing Israel is the definition of truth… unless it states the opposite. Why is it that only when a UN report exonerates Israel and blames Hamas is that report not to be trusted?"

I think I might have mentioned that I haven’t read the book. Maybe Danahar is more accurate in print than in person. Oh, wait, that was from the book.

One almost wonders...no surely not...could the newly acquired, against-the-grain “understanding” of Israel’s position be a way of artificially whipping up a controversy?
You know, a kind of publicity stunt.