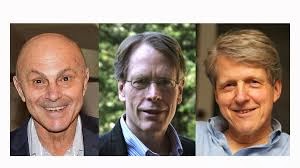 "They call Economics 'the dismal science'.

Today the Nobel Committee seemed to agree. They gave their prize in Economics to three different economists - one for proving that markets are always rational and efficient, and another for proving they are most certainly not, and a third who proved it was impossible to tell."

Thus, whilst watching last night's Newsnight, I wanted to hear from the guy who "proved" that markets "are always rational and efficient."

Newsnight, however, gave me the man who "proved they are most certainly not" - Robert Shiller.

I wasn't surprised by that.

Nor was I surprised when Radio 4's The World at One also interviewed the least pro-market of the Nobel Prize winners, Robert Shiller.

Now, is that because I'm biased? Or is it because the BBC is biased?

If so, why? And, also if so, is that evidence that the BBC is biased?

Feel free to decide for yourselves.

As if you were members of the Nobel Prize committee.
Posted by Craig at 17:52

Labels: 'Newsnight', 'The World At One'