Miscellany for another weekend

Fatwa Lifted
I suppose the BBC could have named Fergal Kean’s series “Militancy through Time the BBC’s prism”. But they didn’t. They’ve lifted the fatwa on the word ‘terror’.

Fergal Keane celebrates sultry failed hijacker Leila Khaled, referring to her as “an icon of terrorism”.

ICONˈʌɪkɒn,-k(ə)n/noun
a person or thing regarded as a representative symbol or as worthy of veneration.

***
“Always something there to remind me” but not in a good way.
When the BBC News channel reported the conviction of Pavlo Lapshyn it seemed like Anders Breivik all over again. They’re still trying to embed within our Branes an implicit-association between ‘far-right’ terrorists and murderers like Lapshyn - and, you’ve guessed it - the ‘far-right’ EDL.
One BBC 24 report described the incident, the court case and the conviction at some length, then suddenly tagged on a postscript about Tommy Robinson’s decision to link up with Quilliam. It’s much more than Amazon’s marketing  strategy, the nudge: “If you bought that, you might like ‘this’.

One Show went to Mo
Mo Ansar was a guest on the One Show the other day where he described his uncomfortable encounter with Tommy Robinson.  Alex Jones and Matt Baker who made no secret of where their sympathies lay. (clue: Not with Tommy R.)
Don’t they know anything? 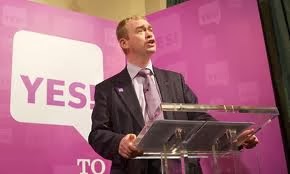 Question Time.
On Question Time Tim Farron MP complained that people were mistakenly blaming immigration for ‘bad’ things, but we should all regard immigration as a blessing. Obviously tarring all immigrants with the same brush is the Lib Dem order of the day. I suppose it’s a kind of numbers game. If numerically more immigrants are hardworking and beneficial to “us” than actual Islamist terrorists, we should ignore all the rest of the problems caused by vast conglomerations of non-integrating non-English-speaking ‘Asians’ and thank Allah for our blessings. 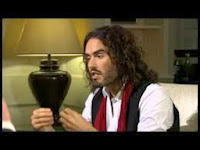 Newsnight
Russell Brand and Jeremy Paxman are more or less equally repulsive. A fair and balanced contest. Russell Brand is just like Kenny Everett being Cupid Stunt. It’s the feminine face and hair. An effeminate man in drag; convincing but for the beard. I’ve heard that some women find him attractive. It must be something to do with his $ fortune. The Brand revolution? Sounds like an orgy of directionless over-enthusiasm leading to self destruction, much like the Arab Spring (or the riots)
His pretentious verbiage about redistribution of wealth begged a pretty obvious response, (i.e. begging) as in this Tweet from Trending Central.
Neither media icons were worth watching, even out of morbid curiosity. Sadly you can’t unwatch sickening things. The item should have gone down the pan.

Now for something completely worthwhile from the Gatestone Institute. This writer has a nice turn of phrase.
I’ll tar the whole BBC with one gigantic homogenous brush and suggest they read it.