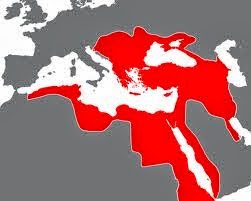 Here's something that might (or might not) help make sense of the strange, sketchy first episode of Rageh Omaar's The Ottomans: Europe's Muslim Emperors (a series now running on BBC Two on Sunday nights), as discussed in an earlier post and an earlier comment.

It comes (via the National Secular Society) from Private Eye back in June:

These are trying times for Aaqil Ahmed, head of religion and ethics at the BBC.

The Ottomans, a three-part series in which Rageh Omar wanders through the lands of the former Ottoman Empire, is beset by problems and falling even further behind schedule. Although 18 weeks had been allotted for editing all three one-hour programmes, the first two have already taken 30 weeks, including delays for an expensive re-shoot in the Middle East. The main problem is Ahmed's ignorance arrogance, which have resulted in hours wasted trying to persuade the contributors to give interviews backing his eccentric interpretations of religious history. At the last count he even omitted reference to the Crimean War.

As is his custom, Ahmed assigned the production not to experts in his department but to an old freelance chum, Faris Kermani, who made many programmes about Islam for C4 when Ahmed was head of religion at the channel and later followed him to the BBC to make The Life of Muhammad. The justification for engaging Kermani was that he could gain exclusive access to middle-eastern locations and contacts that were somehow out of the reach of the BBC. In the end, however, this was handled by department staff using a local fixer in the usual way.

As costs spiral out of control, the job of rescuing the production has gone back in-house, too, with the department's main development executive – helped by a producer on attachment from BBC Bristol – striving to bring some order and intellectual rigour to the chaos.

The most intriguing part of that is the bit about Aaqil Ahmed wasting hours "trying to persuade the contributors to give interviews backing his eccentric interpretations of religious history".

That certainly tallies with the weird excuses for Ottoman cruelty (particularly towards non-Muslims) which punctuated the first episode of the programme (listed on that earlier post).

It will be interesting to see if the generally positive (some have said "triumphalist") tone of the first episode is maintained in the two remaining episodes, and if this whitewashing continues.

The third episode in particular - the one which will look at the decline and fall of the Ottoman Empire - will test just how "eccentric" Mr Ahmed's interpretations of history really is. This was the era when the empire was known as 'the Sick Man of Europe', and the period of the Bulgarian massacres and the Armenian genocide.
Posted by Craig at 16:11