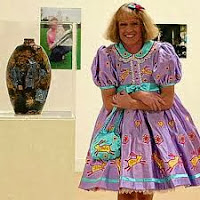 It's making typing out this post rather hard going, but I've got my fingers firmly crossed that Sue will have something to say about this week's Reith Lecture by Grayson Perry.

Grayson himself seems to have a pretty shrewd idea about why the BBC chose him to give this year's lecture:

And I often feel that I’m being wheeled out in many ways as a kind of you know bit of bohemian danger. I always feel like that dirty teddy you see sort of tied to the front of the radiator of a refuse truck. You know, the little mascot. I mean the BBC in asking me to give these lectures, they’re probably hoping that I’ll go off on one and swear a lot.

That said, I'd be surprised if the boss of Radio 4 wasn't congratulating himself at his decision, given how entertaining this series of lectures has been.

As a sample, if you think a lecture by a befrocked contemporary potter isn't for you, please give these quotes from today's lecture a read and see if you enjoy reading them:

When I started at art college, that idea of revolution and change and rebellion was almost the DNA of art. Picasso...one of his favourite expressions was, “We must kill modern art.” That was how sort of central it was to the idea of being an artist, and that’s one of the delightful traits of the art world really... is that after a century, or 150 years now, that idea of revolution and challenge, we encourage it. We kind of say you know along comes the young artist...talented, little bit angry...comes along and he goes, “You establishment!”, and shakes his fist at the establishment and goes, “I am going to show you what fantastic innovation I have here!”, and the art world sort of looks down and sort of goes, "Oh yeah. Nice rebellion! Welcome in!"

And there’s even a kind of acronym which kind of suggests the sort of art that that young man, or woman, might be making, and it’s Maya, M.A.Y.A. - Most Advanced, Yet Acceptable.

Virginia Nicholson, someone with great bohemian credentials because she’s the niece of Virginia Woolf, full-on bohemian, she said recently “We’re all bohemians now.”

And if you think about it, all the things that were once seen as subversive and dangerous - like tattoos and piercings and drugs and interracial sex, fetishism - all these things, they sort of crop up on X Factor now on a Saturday night on family viewing.

The one thing you won’t see though: Underarm hair. The last truly dangerous thing.

And even the art world itself can be quite orthodox in some ways.

I think one of the most rebellious acts done by an artist recently was by Tracey Emin. She supported the Tories.

And that shows you that you know it’s not that difficult in some ways to be subversive even within art.

Me, I have to sort of protect myself against this because when I’m out in the evening and I’m with my mates and I’m being terribly cynical and ironic. But when I want to look at art, I want to have a sincere one to one experience with it because I am a serious artist. I’ve dedicated my life to it. So I go to exhibitions in the morning on my own when I can go, hmm, and you know maybe have a little bit of a moment. I have to protect my tender parts from that wicked irony.