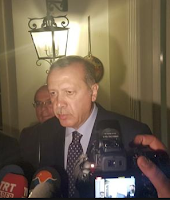 There was a very striking 'audio essay' on this morning's Broadcasting House from American novelist and translator Maureen Freely (who also writes for the Guardian and Independent).

Her subject was 'coups in Turkey', and she recalled previous coups - some of which caught up her left-wing family and friends.

This latest coup attempt, however, struck her as something very different from those previous coups:

Let's start with the military, which was pretty much decapitated seven years ago when Erdogan incarcerated its entire top echelon on treason charges he later dropped.

How could a handful of officers operating inside the severely compromised force have dared to think a coup possible?

Why, when they went ahead anyway, did they focus on the photogenic or the iconic - Istanbul Airport, the Bosphorus bridges, the National Assembly, the Monument of the Republic in Taksim Square?

Why were the troops and tanks they sent there so few in number and so vulnerable to the angry mob?

Why, while the coup was being live-streamed, did its leaders fail to show their faces?

Why was no attempt made to capture Erdogan?

How, amid the chaos, did he manage to FaceTime the entire nation before landing at an airport that had stopped all flights?

Why by then was there an imam singing solidarity from every minaret?

Why, after the coup was crushed, did the President urge his people to return to the streets?

This was, of course, a call for scepticism, and she strongly implied that this was all far too convenient for President Erdogan in his ongoing attempts to crush all dissent.

Those questions, from what I've read and seen so far, are certainly pertinent ones.

The two other voices on BH who commented on the attempted coup (or should that be 'attempted coup'?) were UKIP's Suzanne Evans and Newsnight's James O'Brien, and both shared Ms Freely's heavy leanings towards a 'conspiracy theory' here.

Since this failed coup on Friday night Erdogan's government have rounded up over 2,800 soldiers and put out over 2,700 arrest warrants for judges, of all people. And you just think, how did they manage to round up nearly 5,000 people so quickly? There are rumours circulating that Erdogan is not exactly unhappy with this coup, that he might even have had something to do with it. These kind of actions actually almost seem to fuel that idea......But whether it was or it wasn't [planned by Erdogan], what concerns me about this is that this will give Erdogan an excuse to clamp down and pursue an ever more extreme Islamist agenda.

It is, you're right, hard to imagine that these rounding-ups could have been in direct response to an 'unexpected' coup, but I guess it's the slow dismantling of Ataturk's legacy.

Are Maureen Freely, Suzanne Evans and JO'B  correct in their suspicions?

Was this whole. bloody affair a 'Black Ops' operation by the Erdogan government?

(If so, it was very black indeed, given the loss of life.)

I tend not to believe in conspiracy theories though. Should I start to here?

One thing I do know is that Radio 4 can't be accused of pro-Erdogan bias here.
Posted by Craig at 16:16