What happened when four 'Newsnight' editors gathered around Evan's cauldron...

Beginning to catch up with Wednesday's and Thursday's editions of Newsnight, I'd just say that if you want to sample BBC bias over Brexit in full flow you only need to watch the opening discussion between Evan Davis and the four Newsnight 'editors' on Wednesday night's programme... 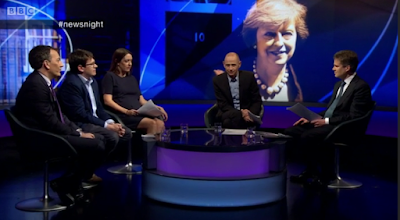 This, of course, came on the day that Mrs May became PM, and it began with Evan Davis talking of the "disconcertingly turbulent" last three weeks and how the ritual of the handover of power might have proved "reassuring" and provided "some calm at last".

...before talking of the "national adventure" we are now embarking on and adding, with a chuckle, "For one thing Boris Johnson is foreign secretary!"....

....and this is the exact facial expression he adopted as he ended that thought: 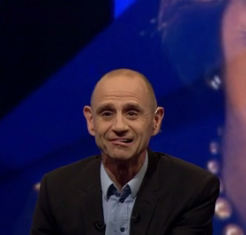 Then his gathering of Newsnight editors began their review of the day.

Nick Watt was perky and jokey; Helen Thomas (shall we say?) less so.

The economy and the fiscal position...cos Theresa May was describing quite an ambitious kind of agenda...the economy may not be working to her favour for all that.

And Helen replied "No, absolutely" and talked (as is her way) of the "uncertainty", "a weakening economy" and "what damage has been done, what damage may be done...by Brexit".

And then they turned to Boris. Evan kept chuckling and said, "Who would have thought it?" to Mark Urban.

And Mark said that people on Twitter had found it "gagtastic" before adding that, as Mayor of London, "he had a rather unsuccessful trip to Israel and Palestine" before then saying "the best he can do" is to be ambassador selling the country to the world.

Evan then stopped chuckling for a while and said:

Yeah. I mean, look, we need to talk about the Boris style of diplomacy.

And he has history, doesn't he I mean, you know..just read you a couple of quotes..

On the Queen and the Commonwealth: "It supplies her with regular cheering crowds of flag-waving piccaninnies/ The tribal warriors will all break out in watermelon smiles."

Now, that was a long time ago, so you might forgive that.

But, you know, just a couple of months ago his limerick about the president of Turkey: "There was a young fellow from Ankara/Who was a terrific wankerer/Till he sowed his wild oats/With the help of a goat/But he didn’t even stop to thankera". He won a prize in the Spectator magazine for that...er...poetry.

Mark Urban replied: "They'll have to, in a way".

And then - to much chuckling from Evan - he raised the much-mooted suggestion that the trio of Brexiteers (Boris, David Davis and Liam Fox" would take the rap if Brexit trade deals proved "too hard"....

...and he (Mark) sarcastically called them "those three experts", pausing before 'experts' to signal the implied inverted commas even more.

Then Chris Cook applied a little irony to David Davis and the article DD had written outlining his take on Brexit:

He actually this week published an article on Conservative Home about his vision. And, I mean, I'm not a trade expert. I think whoever wrote that...it may not be Mr Davis himself...isn't a trade expert either. There are some fairly fundamental problems with it.

Chris then went on to rubbish it, describing one of DD's ideas (in Yes. Minister terms) as "quite ambitious", describing him as "very, very nonchalant" about another idea, and then saying he "talked an awful lot" about something else,...

...pulling the following face as he did so: 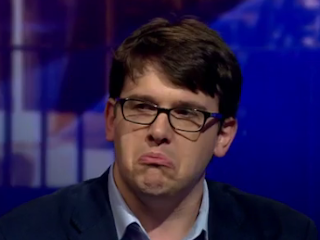 I very much doubt that a single one of those five BBC journalists voted to Leave the EU. And, if so (like there's any doubt!), it showed.

A thoroughly biased-filled BBC discussion from start to finish.
Posted by Craig at 16:27