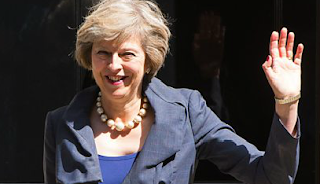 Tonight's profile of Theresa May on Radio 4's Profile (presented by John Peel impersonator Mark Coles) was an attempt to unwrap the riddle wrapped in a mystery inside a contemporary BBC One drama plot inside an enigma that is our new PM.

Well, her long-term friends say she always wanted to lead her country, even from childhood. Her aim was to be Britain's first female PM, so she was "quite irritated" when Mrs Thatcher "got there first" (according to one friend).

Her dad died in a car crash when she was 25. Her mum died a year later. She leaned on her new banker husband Philip.

Jenni Russell of the Times said that a Number 10 source said to her, after she was appointed to David Cameron's cabinet in 2010, "Well, we don't think much of her but we had to have a token woman and she is the best of an unimpressive bunch".

Lib Dem David Laws remembers her looking "extremely nervous" when she become home secretary" - an "uncomfortable fit", he called her, "looked down upon by some of the Prime Minister's inner circle". She said she often seemed "quite a lonely figure in cabinet...not part of the [public school] club", he said.

"Even the Prime Minister allegedly had a rude name for her", Mark said. "Her nickname about her was such that I probably shouldn't record it on a family programme", said David Laws.

I have to say (if all this is fair) that it's getting far easier to understand why Theresa has taken such ruthless and relentless-seeming revenge against the Cameroons in the past few days! (Vengeance is mine; I will repay, saith the Lord.)

She's the longest-serving home secretary in half a century - "a remarkable achievement in itself", said Mark Coles.

But what of her record? Her defenders (including Justine Greening and Eric Pickles) defended her, and Mark Coles said that "from the start she seemed determined to be her own woman" and that "in her six years at the Home Office Theresa May certainly didn't shy away from difficult decisions".

Profile raises a few concerns, however - especially from David Laws over civil liberties = but, all in all, her record sounded very impressive here. Even her failure to reduce levels of immigration was given a positive spin, courtesy of Chris Grayling.

That said, there was something that didn't go down well with Profile. Her "hawkish" party conference speech on immigration last year "positioned her to the right of the party", according to Mark. And Jenni Russell of the Times found it "wrong" and "almost menacing". It was so "hard right" and "chilly" that the Conservative conference "completely held back". Eric Pickles denied that and said she was just being "ahead of the curve".

"Many" see her as "a reluctant Remainer", said Mark, adding that "her critics" think she played "a clever game" by "keeping her head down". Eric Pickles admires her though and thinks she believes in Britain, social opportunity and meritocracy while David Laws is confused, calling her "very difficult to pigeonhole".

Mark reported her Downing Street speech. People were astounded. It sound like a sermon. What did it tell us about her outlook?

All in all, that was a Profile which gave Mrs May a pretty positive take.

As Mark said, early on, her CV was the focus and "we're going to put it through the wringer to see if it hold up".

Though not entirely a hatchet job, last week's Profile was pretty unambiguous in suggesting it didn't hold up, thus reinforcing the views of those critics who said, at Mark phrased it, "she's an untested lightweight who's exaggerated her City career to try to impress".

Its tone was much drier in wit and far more sarcastic in intent that this week's episode.

We're in 'compare and contrast' territory again. And the contrast was clear.

Of course, it's perfectly possible that Andrea Leadsom wasn't up to being PM and that Theresa May (PBUH) is up to the job, and that Profile was only reflecting this.

We'll never know, of course, about the former now, but we'll certainly know in the near future about the latter.
Posted by Craig at 22:38