"But we have to keep an open mind" 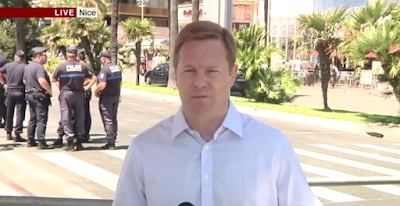 Here, for the record, is how BBC news correspondent Christian Fraser reported the latest of the motives of the Nice killer this lunchtime (at 12:08):

This is a terrorist act by anyone's definition but it becomes so much more in the eyes of the French people if there is a link with so-called Islamic State. He wasn't known to the intelligence agencies but there were documents and a mobile phone found in the cab of the truck which now form part of the investigation. And he was known to police for theft and for violence against a fellow delivery driver earlier this year. And also there is that link to Tunisia. His parents are from a place called Msaken, which is near to the resort city of Sousse where 30 Britons were killed just over a year ago on the beach there. So they will look at all of that. And, of course, we know that Islamic State are claiming responsibility. We also know they've asked their followers to carry out things like this. But we have to keep an open mind that this could just be a very angry, suicidal, lonely individual who wanted to kill as many people as he could when he died himself.