Incidentally, the Twitter feed of Anbarasan Ethirajan, the BBC's South Asia analyst (featured in the previous post) is typical of many BBC Twitter feeds. It proudly bears the BBC's name and says "RTs are not endorsements". 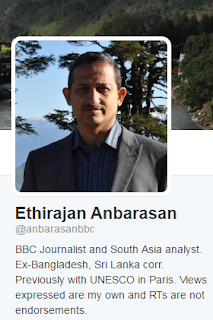 Scroll through his public tweets both before and since June 23 regarding the Brexit vote and you'll see that Anbarasan has RT-ed (or - more accurately - linked to) anti-Brexit piece after anti-Brexit, mostly from the Guardian and the New York Times (many linking racism with the Brexit vote).

"RTs are not endorsements"? Really, Anbarasan?
Posted by Craig at 13:25