Random Thoughts on a Momentous Day 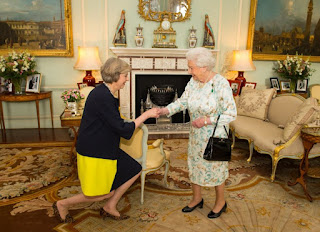 Just a few very random thoughts tonight (with not a link in sight)...

...and please forgive me if you find them all extremely half-baked. I'm feeling very 'half-baked' in my political views at the moment (as some of you may already have noticed)...

Theresa May is playing an absolute blinder so far: Boris as Foreign Secretary, David Davis as Brexit Secretary and Liam Fox as International Trade Secretary.

It looks as if Brexit really does mean Brexit after all.

And some of the leading architects of Brexit are now personally responsible for delivering it successfully.

I see that a new conspiracy theory is already growing though: Was Theresa May a closet Brexiteer all along?

Plus George Osborne has been told (by 'Theresa the Appeaser') that he's not welcome and sent packing through the back door. Ouch!

And how will Boris get on with that "terrific wankerer...from Ankara", President Erdogan of Turkey (of 'sowing his wild oats/with the aid of a goat' fame - in Boris's excellent, prize-winning poem about the censorious, authoritarian Turkish president)?

BBC bias? I've not noticed anything egregious, but...

One BBC report has been reappearing for hours this afternoon and this evening. It gives the reactions of 'vox pops' to the prospect of a Theresa May's premiership. Nearly all of those reactions were positive. Most seem to crave stability above all else, and Mrs May seems to be meeting that craving for them...

..a public craving that (if real) will surely have been even more 'met' by having Mrs May partnered at the top by the even-less-exciting Philip Hammond.

This, however, isn't a prospect that has been universally welcomed (beyond the BBC). Here's the Telegraph's parliamentary sketch writer for example:

And then there was Katya Adler's recurring report (on the EU reaction to Mrs May's arrival) which - like other recent Katya reports on the same subject (and other BBC reporters' takes too) - stressed how "steely, wily, determined" Mrs May is as a negotiator (equal to Mrs Merkel, it seems, from today's reports).

It all felt surprisingly positive about the prospect of a new Conservative PM (something I wouldn't usually expect from the BBC).

(All of those reports, it must be stressed, first appeared before Mrs May began appointing her cabinet.)

The point of this is that - from Monday onwards especially - I've had the strange feeling that the BBC has been 'intensely relaxed' at the prospect of a Theresa May premiership, and part of me still wonders whether the BBC would have been anywhere near as easy-going if it had been Andrea Leadsom curtsying to HM the Queen tonight.

I can't help but imagine a relentless parade of stony or despairing faces and endless doom-and-gloom had that happened.

(Of course, we'll now never know about that. It's just a counterfactual).

(All of those reports, it must be repeated, first appeared before Mrs May began appointing her cabinet.)

Also, I noticed that both of the main faces of the BBC's coverage this evening - Jane Hill and Vicki Young - began echoing each others words over Boris Johnson's appointment.  They both talked of "surprise" at Boris's appointment to the "sensitive" position of Foreign Secretary and his lack of cabinet experience.

Is Boris's appointment not 'the right decision' for them? (It rather sounded like that).

(The centre-left on Twitter are going crazy about how "crazy" that appointment is. The Corbynistas don't seem anywhere near so bothered).

Is this an obvious case of BBC bias here?

Still, the BBC's TV coverage hasn't, all in all, been egregious today. They seem (to me) to have been trying just to report things as they happened - and I've watched their reporting very carefully.

And a lot has happened.

What a time we're living through, politically! The old cliche that something is 'beyond satire' has turned out to be not a cliche at all when it comes to the Labour Party.

And much the same can be said for another much-loved cliche, 'I don't know whether to laugh or to cry', when it comes to the Labour Party.

I have to admit that I'm mostly laughing at the moment. (I know I shouldn't be but I am.) Angela Eagle's string of rib-tickling car-crashes followed by Owen Smith's frankly-beyond-belief decision to enter the race and split the anti-Jez vote have been truly 'beyond satire'.

No writer that I'm aware of has ever come anywhere close to imagining this scale of hate-filled incompetence and downright absurdity. The Theatre of the Absurd needs urgently resurrecting to do justice to any of this. (Bring on the rhinoceroses!)

Such events have been provoking me to think that if UKIP can prevent itself from spiralling down the Labour route into a fatal frenzy of inter-factional bloodletting UKIP could make a massive entry into parliament at the next election. If......

David Cameron's final PMQs was very entertaining and bewildering. The soon-to-be-ex-PM was funny and charming. And so (albeit far more clumsily) was Jeremy Corbyn, who didn't seem at all mean-spirited. Dave and Jez enjoyed each others jokes (often at each other's expense). It was strangely endearing.

I know that's not a profound thing to say, and that little of the above approaches profundity either, but I'm not a profound person when it comes to politics, hence why I tend to stick to narrowly posting about the issue of BBC bias.

I'm comfortable doing that, and I think I know what I'm doing in doing that. And I don't think I'm good at talking politics in general (see above).

Still, good night and sweet dreams. And may (May) everything turn out for the best.