Last night's Newsnight was an absolute shocker, and I'm frankly amazed that there's been so little fuss about it.

It was a 'Get Gove!' edition, pretty much from start to finish. 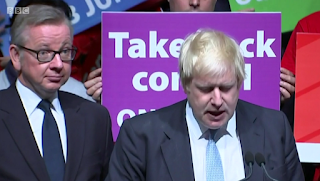 It began with a video montage of yesterday's 'Tory Party drama' set to the accompaniment of Bob Dylan's Positively 4th Street - a song about a treacherous friend.

Can you guess who the 'treacherous friend' was referring to?

Well, Newsnight left absolutely no doubt about that: A clip of Michael Gove smiling behind a speech-making Boris was accompanied by Bob Dylan singing "You've got a lotta nerve to say you are my friend".

The next clip saw Michael Gove grinning alongside Boris and Bob Dylan singing, "When I was down you just stood there grinnin'".

Then came a dizzying barrage of short clips of Mr. Gove saying he didn't want to be and wasn't up to being PM, followed by him saying yesterday that he intended to stand to become PM, immediately 'commented upon' by Bob Dylan - to more past images of happy Michael & Boris - with the lyrics, "You just want to be on the side that's winnin'"...

I think that might be described as preparatory 'mood music' for what followed..

Evan Davis continued to fixate on the 'treachery' issue throughout, raising it with pretty much everyone he interviewed. He pressed it on them, again and again.

That might be understandable, but much more questionable was the stark contrast between the programme's treatment of Mr. Gove compared to that given to Theresa May.

The two reports profiling them are worth watching to see that contrast at its sharpest. 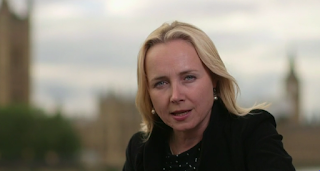 Katie Razzall's take on Mrs. May was overwhelmingly favourable. It included lots of positive language about her from the BBC reporter, and only included admiring 'talking heads' (two Tory fans, one Labour admirer).

Katie painted a portrait of Mrs. May as a pragmatic, hard-working woman with a great grasp of detail who has risen through the Conservative ranks, telling her "toxic" party some home truths along the.way. And she's done so, said Katie, by not playing by the normal rules of politics. After linking her to Winston Churchill, Katie them said her tough negotiating abilities are "skills" that "will appear useful as Brexit looms".

If Mrs. May had stayed up to watch that report she would surely have been tickled pink by it.

Interesting use of the word "looms" there, by the way, in connection with Brexit. (It was the final word of Katie Razzall's report.)

Chris Cook's take on Mr. Gove, in contrast, was overwhelmingly hostile, with lots of negative language almost from the word go (including "total weirdness").

It was, in fact, nothing more and nothing less than a hatchet job.

It began rather mockingly, and included a few cringe-worthy clips of Mr. Gove (at various stages of his life). Michael Gove's time as education secretary was then covered mostly through the hostility of teachers, including a clip of an (unpleasant) insult from one teacher going down an absolute storm at a union conference. His time as justice secretary was passed over in favour of Chris focusing, at length, on Mr. Gove's "hardline" views on the peace process in Northern Ireland. Labour advisor Jonathan Powell denounced Mr' Gove's past views as "pretty far-out" before both he and Chris Cook worried about what those "hardline" views would mean, post-Brexit, for a "tense" Northern Ireland now. Mr. Gove's past support for the Iraq War was also held against him. That support was "so" extreme Mr. Gove even denounced the Daily Mail back in 2004 for being too soft. That leaked email from Mrs. Gove followed - "wrongly" thinking the Mail might back him over the leadership. (Chris struck me as gloating there). And as for that great bogeyman, Rupert Murdoch, Chris Cook then splashed dozens and dozens of dizzying images showing how often Michael Gove has met Murdoch and various Murdoch associates "time and time again".

Mud was being slung - every piece of mud Chris could find - at Michael Gove here.

And then it got personal. Chris Cook said there's a "wrinkle" in Mr. Gove's reputation for courteousness; Those who cross him often face "quite bizarrely vitriolic press coverage".

And he included himself among Mr. Gove's victims. 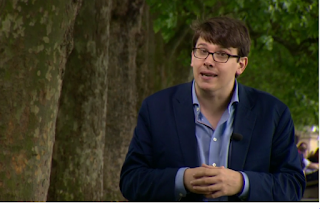 In a remarkable passage of BBC broadcasting, Chris Cook told his personal story (without counterbalance).

He himself came very well out of his own telling of it. Michael Gove came very badly out of it. The BBC man said that, as a result of crossing Mr. Gove , 'friends of Michael Gove' had tried to get him fired from the FT.

A final semi-mocking comment then brought this remarkable piece to a close.

Note that the 'talking heads' here were comprised of one supportive Conservative (very briefly), one hostile Labour type (at length) and an ambiguous Lib Dem.

In years of watching the BBC I don't think I've ever seen two more sharply contrasted reports than these, placed side by side. The bias was palpable.

As for the rest of last night's Newsnight, we had a selection of Conservative activists - two of whom supported Mrs. May, one of whom backed Mr. Gove, another of.whom backed Andrea Leadsom (who hardly got a mention until the non-BBC guest started talking about her), and the final one of whom was undecided.

Later came a discussion with three journalists (Matthew Parris, Isabel Hardman and Stephen Glover) - one of whom (Isabel H) didn't express an opinion on who she wanted as PM, but two of whom (Matthew P and Stephen G) did: They both want Mrs. May.

So that's 4/5 of the main (UK) interviewees who want Theresa May to be our next PM (something Newsnight evidently knew in advance, given the conversations during the programme).

Now, I'm aware that this might appear to be as much of a hatchet job on Newsnight as Chris Cook's piece was a hatchet job on Michael Gove, but you are all free here (as ever) to watch it for yourselves and point out where I've gone wrong.

Plus - and I don't know why I even hesitate to say this - I'm not saying this because of my own bias. My own bias here is for Mrs. May. I'm actually 'on Newsnight's side' here. (Unlike most people who write for/comment on 'blogs like this' I don't think 'Teresa the Appeaser' is the scum of the earth.)

You could say I'm arguing against my own position here - except that I'm doing no such thing.

This post isn't about my view of the the respective virtues and vices of Michael Gove and Theresa May. It's simply about BBC bias.

[Update: There are other views about Mrs. May though (obviously), including a piece Guido Fawkes reports got pulled by the Telegraph after pressure from Mrs. May's team - a dramatic story in itself. Reading it has given me pause for thought re the Home Secretary's suitability to be PM. Wonder if the BBC will follow this story through?]
Posted by Craig at 22:17