Thought for the day

Don’t you just hate it when otherwise respectable people punctuate their conversation with “D’you know what?” I realise they do this for dramatic effect, but in my opinion it just makes them look a bit of a prat.

But it’s a contagion so no doubt I’ll do it myself sometime. Whatever.
The News is like news-on-steroids at the minute. I’ve been binge-watching politics all morning, and d’you know what?  I can’t think of anything interesting to say about it. It’s so mad that even the normal norms are abnormal, if that’s not too Rumsfieldian for a Sunday lunchtime.
Oh yes, and by the way, I’ve been thinking about Andrea Leadsom and motherhood and apple pie, and although I’ve been thinking about it - as a mother myself - I haven’t come down on one side or another in that binary way we often talk about.

Andrea wasn’t the only one who kept saying “as a mother” during the run-up to the referendum. Gisela said it too. I thought they were saying it so as to appear human, rather than robotic and self-serving  “as a politician”. But now it seems that the experts are interpreting it as some kind of weird gloating. If that’s the case maybe I should be peppering my conversation with As a mothers and D’you know whats,  to lend credibility to myself. 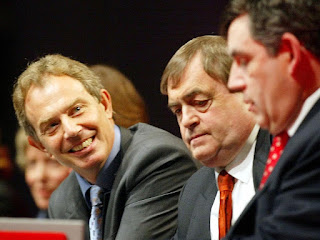 What do I want with credibility anyway. Who needs it? Who would even want to be a politician? More important, who would want to be Prime Minister, after Tony Blair and Chilcot. I’m sure most of the people who say ‘After Chilcot’ haven’t read it, including me. I promise I haven’t read it, but I have read about it, if that’s of any significance. 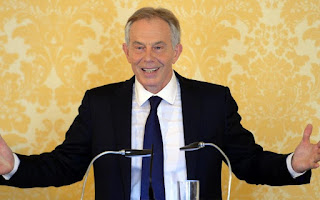 Think back. Tony Blair must have been popular once. He was elected, anyway, and was the Labour Party’s longest serving Prime Minister.

What put me off him was the synthetic and disturbingly emotional speech he made when Princess Diana died. (People use ‘emotional’ as a euphemism for ‘tearful’.) That speech confirmed my suspicion that he was crap. Apart from that, much of his and Alistair Campbell’s spin was effective.

Tony Blair and Jack Straw epitomise spin. Tony’s cronies and so on. It was the era of peak spin, but we kind of knew all along that we were being manipulated but we couldn’t resist.

I think they managed to make the case for going to war with Iraq seem reasonable. The pacifists were against it, but they would be, wouldn’t they? Their job was to go on protest marches and chant slogans about oil.

Back then no-one apart from experts on the Middle East knew much about the clash of civilisations, though the public vaguely knew that somewhere there were some primitive and unsophisticated religious people who could resign themselves to the most devastating personal tragedies because of their belief that everything was ‘the will of Allah.’

We were told about a pattern of violent atrocities and we believed the solution was to topple the tyrant. The Iraqis, whoever they are, must be “people”  ‘just like us‘,  so as soon as Saddam was removed, we assumed they would establish a Western style democracy and live happily ever after.

Remember the previous Gulf war? (Desert Storm) It arose after Saddam’s aggressive invasion of  Kuwait. It was the first time the practice of using ‘human shields’ came to the world’s attention. Although Saddam appeared to be visibly evil ’we’ left him in power, claiming the war ‘wasn’t about regime change’. Nobody fully understood why we couldn’t simply finish him off there and then.

Why, then, did ‘we’ suddenly decide the opposite in the second Gulf war?

Was it because Saddam had murdered hundreds of his own people?

Was it because of Saddam’s ruthless brutality and the murderous escapades of his sadistic sons Uday and Qusay?

Was it because of the regime’s constant obstruction of Hans Blix’s team of weapons inspectors?
Did Saddam have a stash of WMDs, or was it a charade? Why was he acting as if he had something to hide?

I don’t believe we went into Iraq solely because of the sexed-up dossier and the unsubstantiated claim that we could all be nuked within hours, though Saddam did seem like the kind of guy who would do something so reckless on a mere whim.
All of those things contributed to the decision to go ahead with the war, and with hindsight it was the aftermath that was our biggest failure. I’m sure there were people who could have foreseen the disastrous consequences of simply removing Saddam Hussein and his henchmen. Why didn’t they warn the government and why were our Prime Minister and the POTUS so unprepared?

On the other hand,  we’re very, very sorry that no WMDs were found.

(And what was Saddam supposed to have used, other than weapons of mass destruction, when he gassed thousands of Kurds?)

What if they had found WMDs? What if we had not only found, but destroyed them? Would we, in that case, have been very relieved, and very pleased with ourselves?

Would we, in that case, have left Saddam in situ, without WMDs but making preparations to re-stock?
Or, as is likely, would we still have ferreted him out from his rabbit hole and dispatched him to meet his maker, whilst thoughtlessly leaving the very same power vacuum - the situation that, with hindsight, we now regret?

It seems obvious that the same disastrous aftermath would surely have unfolded either way, WMDs or no, but would the invasion of Iraq still seem so futile and worthless if the justification had actually been tangible and substantive?
I mean, if the war had verifiably prevented a possible Saddam-inflicted nuclear armageddon, would the disastrous aftermath, the power vacuum, the Muslim on Muslim slaughter and the religiously motivated barbarity still make the invasion of Iraq seem futile and worthless? Weigh it up.

I watched David Davis on the Andrew Marr show. My initial response to him was why waste your time on retrospective revenge. If you’re going to punish Tony Blair, why not also go for Tony’s cronies, who I notice are all furiously trying to dissociate themselves from the whole business.   Impeach them all, why don’t you, instead of getting to grips with urgent matters in hand, like trying to deal with Brexit in a competent manner.

Anyway. D’you know what? I  think the choice between Theresa May and Andrea Leadsom is between the worst and the least worst. Or the other way round. Who cares? If you ask me the Tories are starting to make Labour look good.