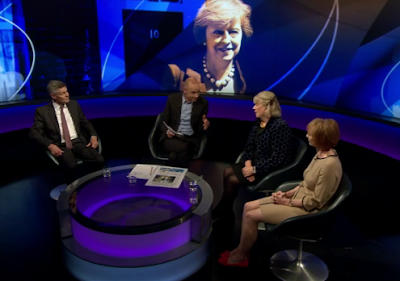 That same (Wednesday) edition of Newsnight also had several discussions with non-BBC guests on Brexit-related matters.

The first discussion was balanced 1:1 between a Leave supporter (Peter Lilley) and a Remain supporter (Heidi Allen).

The second discussion had a 2:1 imbalance in favour of Remain (with Rupert Harrison and  Mariana Mazzucato on the Remain side and Gerard Lyons on the Leave side).

The final discussion has a 3:1 imbalance in favour of Remain (with Polly Toynbee, Matthew Parris and Anne McElvoy on the Remain side and Charles Moore on the Leave side).

That, of course, is the programme's pre-Referendum imbalance on steroids.

This edition of Newsnight also backed up my feeling (as mentioned in an earlier post) that the BBC took to Theresa May's coronation in an 'intensely relaxed' way.

Take this from Evan Davis:

One thing's that painfully obvious is how divided the country's been over the last few months - not to mention the Conservative Party itself. Suddenly Theresa May has risen to the top, powered by a remarkable sense of unity. It's not just the goodwill that offered to a new inhabitant of Downing Street. She's not stabbed anyone, stamped on anyone's head or questioned their ability to govern on account of their family circumstances. By universal acclaim she was the grown-up in the kindergarten.

And he said that last sentence in an entirely serious way, wearing this face as he did so: 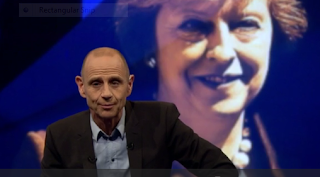 The only real criticism of Mrs May came in Katie Razzall's report on immigration (in light of Brexit and Mrs May's entry into Downing Street).

It came from the public.

Katie's report, however, was striking in a different kind of imbalance.

It featured contrasting voices on the issue of mass immigration. Counting the time given to each side, it worked out thus:

And at the heart of Katie's report was this:

There's no doubt immigration played a key role in the Referendum. Almost all the West Midlands region voted Leave, including multicultural Birmingham...Across the Midlands and both hate crimes rose after Brexit, like at this halal shop fire-bombed in Walsall. 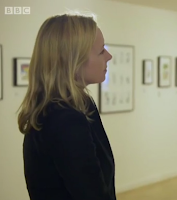