BBC Radio 4 has posted a new landmark page on its website called The Brexit Collection.

I would genuinely urge you to spend some time exploring its 16 items, especially as the BBC evidently regards them with so much pride that it's seen fit to gather them together as its Brexit-related broadcasting 'crown jewels'.

The BBC doubtless regards this self-selected collection as proof of Radio 4's range and depth. For me, however, it's clinching proof that the BBC is irredeemably biased.

Work your way from top to bottom.

You'll begin with an A Point of View from philosopher Onora O'Neill. She's discussing the standard of the referendum debate and, though she claims to be criticising both sides of the debate, one side (the Leave side) is clearly her main target. This was a Remain-biased complaint.

Next comes an episode of Dead Ringers. It made me laugh (especially the joke about Joe Hart punching the air and missing, plus its Jeremy Corbyn and Diane Abbott jokes), but its Brexit-related satire was 20,000 leagues away from being even remotely even-handed. It was severely biased: The Leave campaign taking us back to 1930s Germany, Nigel Farage and UKIP being racists - it was all there. Sample jokes?

John Humphrys: Yes, Leave voters got their country back. Unfortunately it turned out to be Germany in 1932.

Nigel Farage: I don't need you. I've got an army of Europhobes, a battalion of xenophobes and a small squadron of homophobes fighting my corner. And, I'll tell you what, that's what keeps me warm at night - well that and the heat from the burning crosses in my garden.

Item 3 is a selection from Money Box on 'What could Brexit mean for your finances?' Listen to the four selections provided and you'll hear callers worrying about buying and selling their properties post-Brexit, a half-French-half-British family worrying about whether their family might be split after Brexit, an expat living in France worrying about her UK state pension post-Brexit, and a women feeling sick about her investments plummeting after the Brexit vote. Some sensible advice was given but the selection of issues was a clear case of BBC Brexit-related 'doom-and-gloom-mongering'.

Item 4 is that astonishingly biased, 'doom-and-gloom-mongering' edition of The Food Programme. Both myself and David Keighley at News-watch wondered how the BBC could be so brazen as to put out such a blatantly anti-Brexit programme, but put it out they did. And they've now added it to their Brexit Collection for good measure, showing that they are really proud of it! The overwhelming predominance of gloomy anti-Brexit voices as well as presenter Dan Saladino's loaded commentary made this as clear a case of BBC bias as I've heard in a while, and yet the BBC is proud of it. Astonishing!

Next up comes an edition of The Now Show. Like other recent episodes of The Now Show it made strenuous attempts to signal that it was trying to be 'impartial' by telling jokes at the expense of both sides. It failed. I don't doubt that its 'impartial' jokes might have seemed 'impartial' to the studio audience (nearly all London Remain voters at an informed guess) but no Leave supporter would have found them impartial (nor, I'd hope, any fair-minded non partisan). Nearly all the biting jokes went against one side (the Leave side) - from Steve 'n' Hugh to Jon Holmes and, above all, to Mitch Benn. If you've not listened to it, please do. It's funny in parts. It's 'impartiality', however, is utterly bogus and - in so many ways - could almost be seen as the perfect example of BBC bias in action. 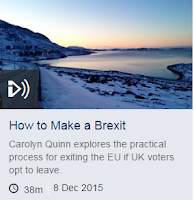 Item 6 is an old Radio 4 documentary called How to Make a Brexit. At the time David at News-watch called it a "travesty" of impartiality, Richard North at EUReferendum described it as "the bias of institutional incompetence" and I worried about its excessive emphasis on the complexity of leaving the EU. We all found it biased, and yet the  BBC is evidently still proud of it.

Item 7 is a recent Farming Today special that featured the post Brexit takes of four people - all of whom supported the Remain side in the EU referendum. It was very interesting, but for all the guests to be from one side of the debate (the losing side) is extraordinary....though, again, the BBC is sufficiently proud of it (and unashamed by that flagrant imbalance) to have included it in its Brexit Collection.

If everything so far has shown the BBC at its most relentlessly biased, Item 8 softens that impression slightly. I love Michael Blastland's The Human Zoo and this was a fascinating look into the psychology of voting in referendum. I reflected my own experience in its findings. I'd call it scrupulously balanced (except for one US professor who, in passing, clearly placed Trump and Brexit supporters in the same unhealthy place).

Item 9 is that massively-biased post-Brexit edition of Evan Davis's The Bottom Line, about which I raged recently. All three guests were Remainers in the EU vote, and all were downbeat about Brexit. My pay-off line to that post was, "The fact that they didn't even bother to try and cover their bias this week is seriously alarming." And to that I can now add, "The fact that the BBC have included it in their flagship Brexit Collection is beyond alarming. It's proof that either (a) they can't see how biased they are or (b) they don't care how biased they are".

Item 10 is John Gray's A Point of View, 'On Brexit' - a piece I've given credit to before, calling it 'one swallow' - as in 'one swallow doesn't make a summer'. It remains a must-hear piece, and it's a credit that the BBC included it in their Brexit Collection too. It really is the exception that proves the rule though. It's the only positive take on Brexit to be found anywhere in this Radio 4 selection - a fact that pretty much proves BBC bias here.

On we go to Item 11 and a Money Box edition that featured a segment on 'post-Brexit pension prospects'. Guiding us through the subject was the strongly pro-Remain government minister Ros Altmann, who got into huge trouble (during the referendum) for tweeting that voters shouldn't overrule elected MPs by voting for Brexit. Her tone reflected that.

And Item 12 was a More or Less collection that echoed its previous series - the bias wherein I've described at some length before. All I'll repeat here is that it began, yet again, by 'debunking'...can you guess what?...(Clue: the statistical claim it debunked is an anagram of '503' and connected to the words 'million a week to the EU').

Item 13 was an In Our Time edition on 'Sovereignty'. I myself couldn't hear any bias in it but commenters at Biased BBC complained that it was pushing the anti-Brexit side. Was I wrong not to hear bias here and to think of it as being typically un-topical (one of the joys of In Our Time)? Alarm bells are ringing though that the BBC choose to include it in this ultra-biased Brexit Collection. Did I miss something? 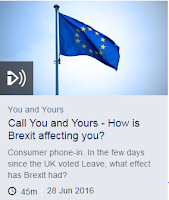 Item 14 was an edition of You and Yours called How is Brexit affecting you? This is the one programme I haven't listened to. Its website blurb says:

It's just a few days since the UK's historic vote to leave the EU. We want to know how it is affecting you.


Has it made a difference to the amount of work you are getting or how much you earn from your work? If you run a business, have you seen an impact? Are you putting off or bringing forward any projects? Are your customers behaving differently?


There has been much talk about the uncertainty caused by the vote. We want to hear how that is making a difference to you.


Has Brexit changed things for your personal finances? What about holidays, buying a house or plans for the future?


Has it made a difference to your relationships with friends, family or within your local community?


Email and tell us how the Brexit decision is changing things for you - youandyours@bbc.co.uk and don't forget to leave a phone number, so we can get back to you.

As I've not heard it (and just can't bring myself to bother) I can't comment.

Item 15, however, is something I have heard - and written on at length: the landmark Allan Little series on Radio 4 called Europe's Choice. (You can read all my very detailed stuff about it here). Over three episodes Allan Little gave a history of the EU/UK relationship featuring dozens upon dozens of pro-EU voices. Only in the last episode did one (non-withdrawal-supporting) Finnish Eurosceptic appear - and he was described as a "nationalist...floating a conspiracy kite". The pro-EU bias was so strong that even the generally pro-BBC Prebble review noted the bias. And yet - yet again! - the BBC has now shown, by including it in its Brexit Collection, that it remains immensely proud of this immensely biased piece of BBC reporting.

And the final item in Radio 4's Brexit Collection was a fascinating edition of Radio 4's Law in Action called 'Brexit: The Legal Minefield'. It featured three legal experts - Mark Elliott, Catherine Barnard and Steve Peers. Fascinating as it was I grew very suspicious of it. So I checked the Twitter feeds of all three guests (linked to on their names above). Guess what? All three are strongly (even passionately) pro-Remain.

Spend a few hours perusing this BBC Radio 4 Brexit Collection for yourselves, if you have time. If you do, I can't see how you'd be able to disagree that this is a very heavily anti-Brexit-biased selection of Radio 4 programmes and that this provides close-to-conclusive evidence that the BBC as a whole has a heavy anti-Brexit bias.

My ruling? The exhibits exhibited here by the Defence are the most damning gathering of exhibits I've ever seen. The BBC has gifted the Prosecution. The verdict is beyond reasonable doubt: The BBC is guilty of bias. Case closed.
Posted by Craig at 22:56