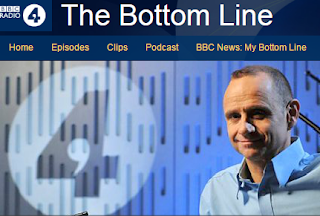 The sense that the BBC is now throwing caution to the wind over Brexit, impartiality-wise, struck me again with this week's The Bottom Line on Radio 4.

Where has all the pre-vote impartiality gone? Completely of the window by the looks of it.

As a result of having three UK company heads who didn't want a Brexit, can you imagine what the programme was like? Yes, it was almost entirely downbeat - something I can illustrate by simply quoting Evan Davis's mid-point 'summing-up':

Wouldn't you have assumed that the programme's makers would have thought themselves duty-bound to invite at least one pro-Brexit business voice onto this post-referendum edition of the programme, even if just for a show of impartiality?

The fact that they didn't even bother to try and cover their bias this week is seriously alarming.
Posted by Craig at 20:09