I sent a message to Craig about Newsnight. I made some derogatory comments about Theresa May, and he said I should post it to counterbalance his moderately positive take on her. 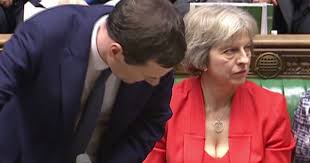 I was going to hide it btl  in case I disagree with myself tomorrow. Precautionary measure. But the article in question has moved so far down the page due to Craig’s astonishing productivity that I have been forced to post it up front.
Here’s the gist of it:

“I keep falling asleep as soon as Newsnight comes on, so I missed the last couple of editions. The episode you describe sounds super-bad. It really is as though they've cast all pretensions of impartiality aside. In for a pound in for a penny, they must have said.
Evan is becoming ever more cadaver-like. He was unwatchably aggressive with Crispin B. the other night and next minute he was attentive and interested while interviewing Jonathan Freedland and (surprise) Melanie Phillips.

I can't fathom the reasoning behind Newsnight hiring James O'B. either. He's ugly and his delivery is totally devoid of authority. A third rate shock jock.

Newsnight is slowly poisoning itself to death. Maybe not slowly. Put it out of its misery, I say.

By the way, have you read all the negative stuff about Theresa May? Doesn't it put you off her?  I never liked her, ever since her early appearances on QT. She used to wear jackets that looked as if they were made out of polystyrene, and her comments were feeble, dull and unimaginative. Always. And Theresa, if you become PM, please, no more above the knee skirts and for god's sake put yer tits away.


The thought of her as PM is deeply depressing. Soft on Sharia, and one of the deluded politicians who insist Islam is the R.O.P.  - and I.S. is nothing to do with Islam. Since Islam is one of the greatest threats we face at the moment (coupled with economic melt-down) I don't feel optimistic. If the BBC can't be impartial it should be 'talking us up' instead of sabotaging us. If you must be biased at least use the bias constructively, why not.( Maybe I shouldn't be talking down Theresa in that case. Maybe, if elected, she'd rise to the occasion.)

I blame David Cameron for plunging us into this unnecessary instability. While people are publishing avalanches of ‘gotchas’ about those contradictory statements made by Michael Gove, why don’t they push some of Cameron’s misleading and dishonest assurances about “not being quitters” and so on.  Eh?
Posted by sue at 18:59