There’s a bit of a ‘grateful for small mercies’ flavour to some of the responses to Shami’s antisemitism report. John Mann and Jonathan Arkush both seemed reasonably satisfied with it.
We’ll have to see how Keith Vaz and his merry men handle it tomorrow. 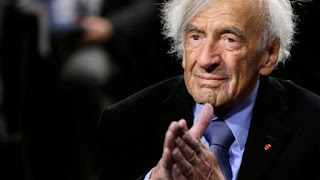 Incidentally, Ed Stourton began the interview by mentioning the death of Elie Wiesel.
The BBC’s obit was respectful, but the early morning reports of his death on radio 4 bulletins - not so much. For some reason they shoehorned something about Wiesel’s critics (who doubted the enormity of the Holocaust) into the report  Work experience guys on night duty I suspect.

*******
Did you read Fraser Nelson’s review of Andrew Marr’s interview with Andrea Leadsom?
He called it a ‘scratchy job interview” (I wonder if Speccie writers make up their own headlines) I didn’t think it was scratchy at all - at least any scratchiness came from the direction of the interviewer rather than the interviewee.

This business of trying to destroy ‘Leave’ people by bashing them over the head with a wet Nigel Farage is beginning to grate. The media has managed to toxify Nigel Farage so that letting slip the merest whiff of agreement with anything he’s ever said or done is to commit virtual suicide by association. The very mention of “That Poster” is enough to trigger sufficient unsafety to reach outer space. My god. It’s almost like “Settlements”
Mention “Settlements” and you’re finished.  Poleaxed by misdirected outrage.

*******
My constituency MP, minister for DEFRA, has come out in favour of Michael Gove. Good for him.
The media has been really mean to Gove, amplifying the back-stabbing label for all it’s worth. I actually believe his version of how events panned out with Boris.  As Gove says, Boris could have stood if he really wanted to. The downside of it all is that it reveals a lack of judgment on Gove’s part - or at least a prolonged case of hope triumphing over experience.


I think the media despises honesty whenever they suspect an MP is suffering from it. They want their MPs to be back-stabbing, ruthless and robotic. I don’t know why. That’s my honest opinion and, for now, I’m sticking to it.
Posted by sue at 17:43