The return of the Migrant Crisis? 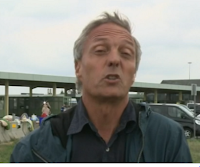 Thursday's first post-Brexit vote edition of From Our Own Correspondent gave us another chance to hear from one of the BBC's most opinionated foreign reporters, their Central Europe correspondent Nick Thorpe (a regular here at ITBB during the 'now-forgotten' migrant crisis).

Here he talked about the "fateful" British vote's effect on Eastern Europe. It's provoked "shock". "anger", "fear" and "insecurity" there.

And he had a personal message for us too:

People in Britain often tell me that Europeans don't like us. My own impression is the opposite.

Wherever I travel in Eastern Europe people tell me how much they love the British for our idiosyncrasies, our awkwardness, our stubborn pints and unconvertible inches. We're respected for keeping our own currency and resisting the faceless euro. Our diplomats are admired for helping other nations end their wars and our soldiers for doing the job they were given and then going home.

If that positive image of Britain in Europe were more widely known in the United Kingdom perhaps the result would have been different.

(Might it? Are you, dear reader, now feeling 'buyer's remorse'? If only you'd known how much they love us!)

And the consequences appear to be wholly negative over there (at least from Nick's account):

The departure of Britain from the UK - if that actually happens - will deprive Eastern Europe of an important ally....For the countries of the Balkans it's a disaster.

At least the following report from India from Sanjoy Majumder gave a less wholly gloomy picture. Though the first half of his report (following an introduction from Kate Adie that began, "No one knows if or when the UK will trigger Article 50...") began negatively too, with "It's a disaster" as the main "refrain" in central Delhi, and lots of talk of "turmoil" and economic concern, it did, however, go on to say that lots of Indians now see opportunities for better business deals, and for much more migration from India  to the UK. Its closing line ran as follows:

"It's not all bad news," says one business leader, with a chuckle. "We may be able to help them out of their crisis". 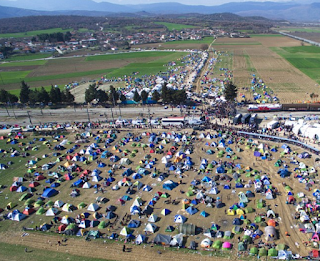 And then came a story you - like me - won't have heard much of at all during the EU referendum debate. It's the story that many complained at the time was being conveniently 'forgotten about' by the BBC. But now it's back on the BBC, and here's how Kate Adie introduced it:

What with Brexit, political turmoil and terrorist attacks, news of Europe's refugee crisis has dropped off the front pages.

Ah, yes, Kate! "Dropped off the front pages", has it? It's the newspapers' fault, is it? It's not dropped even more markedly off the BBC News website, and the Today headlines, and BBC One's News at Six in recent months too?

She went on to tell us something you might not have known:

On the day of the referendum vote the Italian navy and coastguard said they'd rescued 4,500 migrants during that single Thursday.

It was then back to the kind of report which we haven't heard for many months.

Freelance reporter Lizzie Porter reported from "a makeshift Afghan village" in Greece, where "increasingly anxious" people claim to have escaped the Taliban and "the so-called" Islamic State. She tells their stories, over sweet dates and tea. She seems to believe them. A little girl inspires her with her energy, but everyone else is depressed. "Don't you people in Europe watch the news?", was a refrain. Her closing words came from 'Habib':

If you saw us now you would not believe we are human beings. Pray for us.