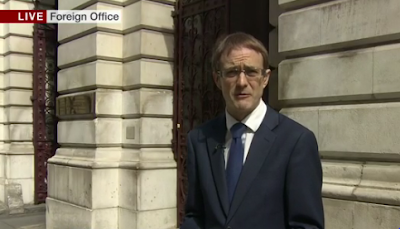 This was part of BBC political correspondent Chris Mason's introduction to a short interview with Boris on the BBC News Channel at 10:10 this morning:

Mr Johnson has a curious relationship with Turkey. His great-grandfather was a controversial journalist and politician killed in Turkey, and a figure sufficiently controversial that his name, if you like, is still mentioned in conversation in Turkey now. And just a couple of weeks ago, before Mr Johnson took up his post here at the Foreign Office, he won an 'offensive poetry' competition run by the Spectator magazine in which he penned a verse about the current president which, to put it mildly, was less than complimentary. Anyway, within the last half an hour of so Mr Johnson has made a statement. We'll play it to you now.

And here's the closing part of that interview with Boris:

Chris Mason: Yes, two and a half million Brits go to Turkey every year. What specifically are you guys saying in the Foreign Office to British tourists right now? And, secondary to that, what do you say to those people who would say, 'Are you the person to be offering this advice given that just a few weeks ago you wrote that poem about the Turkish president?'?

Boris Johnson: I think the thing you can do is look at the travel advice and if I've anything more to say we'll be out later on. Thank you.


You get an insight there into Mr Johnson's reticence to engage with my specific question about his remarks a matter of weeks ago about Turkey's president given that, as he said, just a couple of hours ago he was on the phone to a member of the Turkish government.

Shortly after, Gavin Esler took up the same theme with him:

Gavin Esler: Just a quick question before you go, Chris. The point that you alluded to earlier about something that Mr Johnson wrote in.a poem about the Turkish president. We've seen, in just a couple of days since he's been in the Foreign Office, booed at the French embassy. We know he's written things about various American people, President Putin and so on. Are we going to see serious events round the world with people actually asking him about things that he's written in the past which he may now find a bit awkward?

Chris Mason: Yeah. I think we are. And in many ways my question to him was an illustration of that. I think he will hope - and the new British prime minister Theresa May will hope - that there's a finite number of occasions on which that kind of thing will happen because whilst Boris Johnson is well known for the colourful nature of his language and the colourful nature of his photo-opportunities there is a finite, albeit relatively well-stocked series of, frankly, insults that he has levelled at various world leaders or aspiring world leaders over the last few years. I think in his early weeks and months as foreign secretary, yes, he will be confronted with those remarks because there's no disputing he said them and he now carries a serious office of state here in the UK. I hope that Mrs May will hope that in the medium term the advantage he can bring to this office is akin to what he was seen by his supporters to be very good at doing when he was the Mayor of London - in other words to be a colourful ambassador for the city. They will hope in time he can be useful, successful and colourful ambassador for the UK. But with that will come scrutiny about what he said in the past.

Gavin Esler: Indeed. Chris, thanks very much. Chris Mason there, thank you.

And an hour later, Chris was back at it, framing Boris's statement/interview in much the same way as before (at 11:12):


I then caught up with him. He gave a statement a couple of hours later, shortly after 9:30 our time, in which I asked him for his reaction to events in Turkey but pressed him as well about his connections to Turkey. His great-grandfather was a prominent politician and journalist in Turkey, and a controversial one too - sufficiently controversial that his name is still controversial to this day. And also a poem that Boris Johnson had written about the Turkish president just a matter of weeks ago that won a competition in the Spectator magazine - a magazine he used it edit. It was  an 'offensive poetry' competition run that he won and it was derogatory about the president of Turkey in the strongest possible terms. You'll hear my question about that shortly. Firstly his reaction to events overnight.

And after a reprise of the interview/statement, he added:

And there is, as I was hinting there, plenty more advice if you are planning a journey to Turkey or you're in Turkey now and trying to get out on the Foreign Office's website. Plenty more advice but not a keenness from Mr Johnson to answer my question about his poem.

This kind of thing has been going on since his appointment, of course.

Stretching from Newsnight on the night of his appointment through Today, The World at One, PM, BBC One's News at Six and News at Ten and The World Tonight the following day, the BBC certainly hasn't been reluctant to raise such concerns - at length. They all gave us a 'little list' of Boris's 'colourful language'.

I don't recall any of them giving us the full context of Boris's 'offensive' Erdogan poem (as a protest against the decision, made at the Turkish government's request, to prosecute a German comedian for insulting the Turkish president in the German courts).

Was this inevitable? And how long will the BBC keep on doing it?
Posted by Craig at 12:22