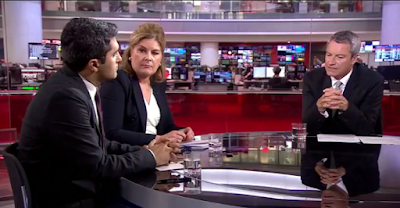 Guney, I just wondered how...He wrote a pretty juvenile poem which won a prize which said things about President Erdogan which, I think, on reflection he might think are rather silly. I mean, does that matter to people in Turkey?

Let's just recall that Boris's winning poem was meant to be juvenile. That's what Douglas Murray of the Spectator specifically asked for - and he didn't ask for it for childish reasons. He was being deadly serious.

It was a sincere protest at the prosecution of a German comedian (in Germany) at the whim of the increasingly despotic and paranoid Erdogan and that German comedian, Jan Böhmermann, had posted his own deliberately juvenile poem to protest against Erdogan's suppression of free speech - which was the very thing that got him prosecuted (as he suspected it might).

I say 'Bravo to Boris!' for standing up for free speech and opposing an Islamist abuser of democracy and his bid to silence critics even beyond his own country's borders.

For Gavin Esler and Evan Davis (and others), however, this seems to be simply about Big Bad Boris gratuitously insulting Johnny Foreigner - and why he's such a dodgy choice for foreign secretary.

Surely they must know (as senior journalists) that Boris was helping the Spectator to make a serious and increasingly vital point here?


P.S. Dateline London was full of guests saying that Brexit was a terrible thing for the UK.

Steve Richards of the Independent, Benedicte Paviot of France 24 and Suzanne Lynch of the Irish Times all made such points in all three of the programme's discussions (on Turkey, Nice and Mrs May).

Only the Turkish journalist kept his counsel on the matter.
Posted by Craig at 20:56