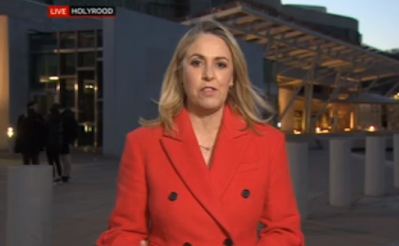 I see a dark Twitter storm gathered around BBC News's Scotland Editor Sarah Smith overnight with the usual calls for her sacking.

In fairness, the complainants had something substantial to complain about. She made a horrendous mistake at the start of yesterday's BBC One News at Six, saying:

Alex Salmond said he believes Nicola Sturgeon has misled Parliament and broken the ministerial code, which he thinks means she should resign.

I actually spent the start of my weekend last night watching, on catch-up, the whole of Alex Salmond's appearance at the Scottish Parliament select committee. The last few hours of it were particularly gripping. So I know for a fact that Mr Salmond went out of his way throughout not to say that Ms Sturgeon should resign but to say that that's a matter for others to judge. Therefore, it simply beggars belief that a BBC journalist of the standing and seniority of Sarah Smith should say otherwise - and get it so wrong - during the BBC One News at Six headlines. It leads me to wonder: Hadn't she been paying attention?

She later issued a 'clarification' (though not an apology) on Twitter:

2. He said “I've got no doubt that Nicola has broken the ministerial code but it’s not for me to suggest what the consequences should be”.

I don't think there's been an on-air correction/apology yet, though the BBC Press Office put out a Twitter statement saying pretty much word-for-word what Sarah said there.