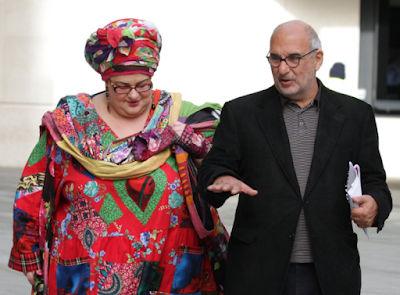 A real bolt out of the blue this past week was a High Court's ruling clearing the founder and trustees of Kids Company of wrongdoing.

That means Camila Batmanghelidjh and - of especial interest to this blog - BBC high-up Alan Yentob.

The judge said that, were it not for "unfounded allegations", Kids Company might have survived.

It's one heck of a turn of events.

Oddly, I noticed the story after someone re-tweeted the main Newsnight reporter on the original story, Christopher Cook, maintaining that "they've never managed to knock a chip of paint off" his reporting.

Newsnight's reporting at the time surprised many of us hereabouts by painting a damning picture of Camila B & Alan Y's activities, and did real damage to CB & AY's reputation.

The Mail on Sunday reports that the Royal Television Society, which gave Newsnight an award for their coverage of the story back in 2016, is now "looking into" that award.

If so, and despite Chris Cook's protestations, is this yet another Newsnight investigation that got it badly wrong?

Christopher Cook is a heavy tweeter and tweeted heavily on the day of the ruling itself, defending himself. And then came the silence. Total silence.

Unless he's just taking the weekend off (which he usually doesn't as far as Twitter is concerned. He'd previously tweeted heavily every day, including New Year's Day and Christmas Day).

Where is this story going next? Will this week's Newsnight return to the story?