Has Question Time lost its punch? 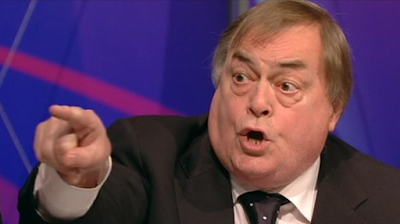 Alastair Stewart made a couple of observations about the programme's travails the other night which I thought I'd pass on:

How BBCQT can appear to flounder, given the Brexit aftermath, an impending Budget & Covid19, is truly beyond me.

A friend writes, in confidence, that the BBC and the producers of BBCQT should be mighty relieved the criticism focuses on left/right bias - from both the left & the right. He has a point.

When someone replied, "I think the ratings decline is explained by the fact the show no longer attracts "A" list politicians or interesting celebrities who often bring based humour and opinions into the debate", Alastair replied, "I wonder if that is a chicken/egg problem."

I'd guess it is. The days of big-hitters appearing do seem to be over. Why would they bother now?

And talking of 'big hitters'...

I have the Question Time of 30 years ago to thank for making me understand the power of the word 'claptrap'.

Whenever John Prescott appeared his answers, often prosperously overblown, would get louder and louder and wilder and wilder until he was almost breathless and red in the face by the end, but he'd almost invariably trap a good clap from the audience as a result of his efforts.