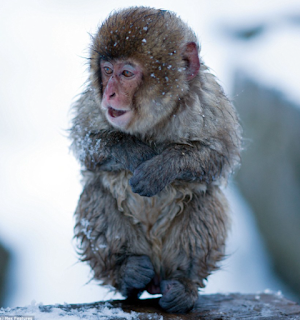 Andrew Marr had quite a turn of phrase on his eponymous show this morning:

And so to the weather. It has been brutally cold - Baltic. Balls and brass monkeys. Nice weather for wolves. Sarah Keith-Lucas is in the weather studio. For pity's sake, please tell us that it's going to get warmer.

I've been reading up on the origin of the phrase 'cold enough to freeze the balls off a brass monkey' as a result. Apparently, it originated in the US and has nothing to do with cannonballs.

The 'balls', in fact, were a late addition, with the full phrase first appearing in print as late as 1978 in the autobiography of leftist activist Mary Oppen:

The first taxi man George encountered in Brooklyn said, "It is cold fit to freeze the balls off a brass monkey."

They may have had a much longer life in street slang though. Here's F. Scott Fitzgerald's wife Zelda in 1928:

This damned place is 18 below zero and I go around thanking God that, anatomically and proverbially speaking, I am safe from the awful fate of the monkey.

It seems clear which parts of the anatomy she was alluding to.