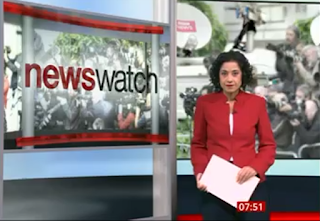 It has become something of a tradition hereabouts to confidently predict that, whenever a famous BBC presenter steps down from a flagship BBC programme, Samira Ahmed will get the job next.

It's a prediction that's yet to come true, though the likelihood of it finally doing so has increased over time - especially after Samira began actively pushing for such roles herself.

She applied, for example, to host Question Time but lost out to Fiona Bruce - though it appears the BBC also lost out as, by most accounts, Ms Bruce hasn't been a roaring success. (To put it mildly). I believe Samira would have done it well, in the less showy style of Peter Sissons.

And now her time appears to have come. She's the favourite to replace John Humphrys as host of Mastermind.

Not everyone's a fan though. Here's Amanda Platell, for example, in today's Daily Mail not holding back:

The bookies' favourite to replace my brilliant colleague John Humphrys as the host of Mastermind is Samira Ahmed, a presenter with all the charm and warmth of a wet weekend in Hull.

The other leading contenders for the job are all women and, unsurprisingly for the hand-wringingly PC Beeb, not a single bloke is in with a chance.

How long before the BBC is renamed the British Broad Corporation?

Is she too low-key to host a BBC quiz show? Or will she emerge from her understated, somewhat reserved TV persona and make a success of Mastermind as a witty, personable presenter?

If she gets the job, of course. Her recent legal victory over the BBC probably needs baring in mind and could swing the decision either way: The BBC might want to make amends to her, or the BBC might still be holding a grudge.

Anyhow, here endeth our latest 'Samira Ahmed is probably like to be given the job' post. The tradition lives on.