It's been a dramatic week for the BBC as far as China goes. First, the BBC was banned in mainland China then, later, in Hong Kong.
The BBC issued two press releases on the matter: 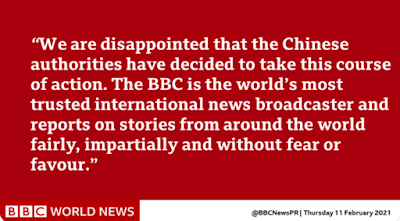 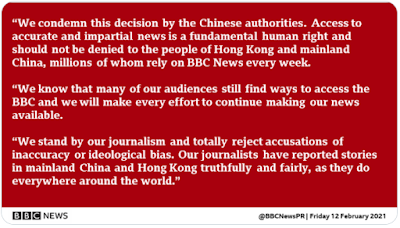 The communist dictatorship accused the BBC of a 'slew of falsified reporting' on issues including Xinjiang and China's handling of coronavirus and said that 'fake news' is not tolerated in China.
BBC staff have taken to Twitter to back the BBC, including Nick Robinson:

My Mum used to hide in a cupboard in Shanghai in the 40’s to listen to the radio with her parents - refugees from the Nazis. They wanted the news from London not self serving propaganda. It was banned then. It’s banned now. The BBC will carry on giving the news to the world.