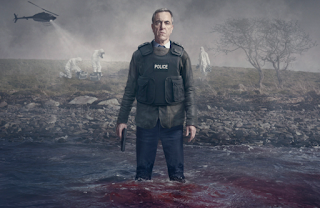 I much preferring reading reviews of TV dramas these days to watching those dramas. My loss maybe, or maybe not. Anyhow, here are two Times reviews of BBC One's latest moody drama, first from Carol Midgley:

I watched the first half of Bloodlands, possibly like you, with a sense of “been here, done this” ennui. James Nesbitt was a brooding, sad-faced detective with a tragic backstory (tick). He was put on a case that he thought was connected to another (highly sensitive) one, but was told to “just leave it. It’s in the past” (tick). That case involved his murdered wife (“She’s gone. Nothing’s gonna bring her back”) and now he was on an angry mission to solve it (tick). Pass the déjà vu tablets, I think we’re going to need them.

The second came from Camilla Long and was slightly less charitable:

What is even more embarrassing than having produced Bloodlands, the most lumpen, graceless, cheapest cop drama in living memory? The answer is: scheduling it in the same week as [ITV's] Unforgotten, one of the best and most elegant, complete with its subtle script, understated acting, and, of course, Nicola Walker.

There is no comparison, for example, between spending an hour with James Nesbitt, grinding his awful gears as some detective in a shockingly basic, bothy-strewn, Nor’n Irish crime drama, and giving yourself over to the finely tuned Walker, who returns to Unforgotten for a fourth series and one last unsolved murder.

It felt loved and cared for, unlike the incomparably ugly Bloodlands, which felt as if the BBC only ran it because they’d lost a drunken bet. The script, we’re told, was nurtured by Jed Mercurio, the creator of Line of Duty, which suggested a tight, fraught drama with backstabbing and bent coppers, not a vanilla cop-style product that felt as if it had been written by a 15-year-old Jed Mercurio fan, which the BBC then showed out of pity and guilt.

I think I'd stick with reading the reviews.