As Rob observes on the open thread:

It's the funeral of the murdered MP David Amess today. Not that anyone reading the front page of the BBC News website would be aware of that of course.

More inconvenience to the narrative memory-holed.

This isn't a minor omission. It's a jaw-dropping one, and one that needs remembering.

Even Sky News has a front page video reporting the funeral, and the Guardian has it as a main headline.

As we've noted many times before, this kind of story is far too big for there not to be a BBC online report somewhere about it, but usually if it's a story the BBC doesn't want to make prominent they ''bury it in Berkshire'', so to speak.

And so it is here.

The report about the funeral of a murdered British MP is presently on the UK Page and tagged to 'Essex': 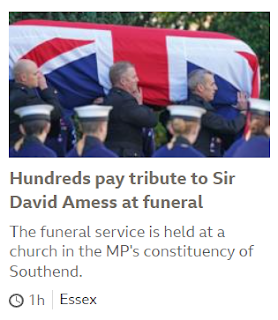 We can get angry about such things [as I'm doing now] and this is clear, demonstrable 'bias by burying', as well as disrespect towards Sir David Amess. But I sometimes worry that I'm getting too angry - and I always want to be fair.

Here, for example, the angry part of me felt that the word ''hundreds'' in that headline was meant as a deliberate belittling sneer at Sir David by some nasty BBC hack...

...especially when even the Guardian went with Mourners line streets of Southend for funeral of David Amess. Locals gathered outside church to pay tribute to ‘one in a million’ MP’s generosity and sense of humour.

Am I right or am I overreacting? What do you make of that BBC headline?

UPDATE [23/11]: In fairness, after yesterday's private funeral service, today's public funeral service for Sir David is being prominently covered by the BBC.