They come not single spies, but in battalions

It's heartening to see that local newspapers are still producing scoops and that the BBC's juggernaut hasn't strangled them completely.
Today The Yorkshire Post has a scoop about cricketer Azeem Rafiq: 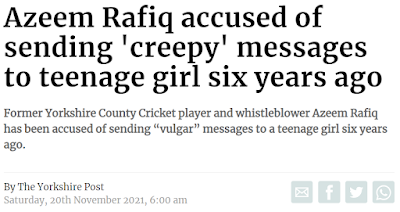 The girl says she agreed to have a vodka coke with him on a plane to Dubai and is quoted by the paper saying, “I was just kind of shocked by the crudity of those messages. They were just so vulgar. I'm not disputing any of his racism claims, because I'm sure they're very true experiences. But certain aspects of what he said just don't really sit right with me. If he was being forced to drink by his teammates, then surely that wouldn’t then mean he would be drinking alone on a flight and encouraging a 17-year-old girl to be drinking with him. His behaviour towards me was a direct contradiction really of what he said in his testimony. He's calling for equality and respect, but why is he not embodying that in all aspects? Especially in his tone towards women. It’s hypocrisy. He is being put on this pedestal for inciting systemic change, but he's really contributing to the problem of the vulgar attitudes towards women. The whole nature of that doesn't sit right with me.”
Posted by Craig at 12:30