No change there then 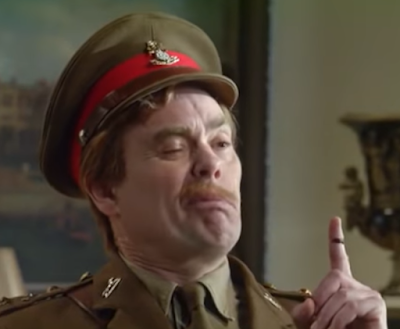 I actually listened to a Radio 4 comedy programme today for the first time in many, many months - and quite possibly for the first time in 2021 (if memory serves me right).
Seeing that it was that vehicle for The Actor Kevin Eldon which I didn't find overly funny four series ago when it started in 2012, I wasn't expecting much, but I did get a few laughs out of it.
It was pleasantly silly.
I particularly enjoyed guessing the punchline of one of the main running gags in advance [the one about the couple splitting up].
The biggest laugh I got out of it though was unintended.
It was just one line, but it brought back happy memories of my old 'it's funny cos it's true (hopefully)' Radio 4 Comedians Bingo card.
The main quirk of that bingo card was that The Daily Mail appeared three times ''because just having it once would be far too easy, given how often Radio 4 comedians have a go at it''.
Today's The Actor Kevin Eldon vehicle on Radio 4 also recalled that wonderful Harry and Paul sketch from The Story of the Twos, 'Panel Show', where most BBC comedy punchlines (if they weren't about sneering at Ann Widdecombe) ended up as 'Oh My God, the Daily Mail!'
The one tart remark on today's The Actor Kevin Eldon Will See You Now on BBC Radio 4 was:
🎺🎺🎺

Before we go let's have a look at tomorrow's headlines...The Daily Mail has 'Everything we print is to some extent a lie, apart from this'.

In a rapidly changing world, it's almost reassuring that some things never seem to change.

The very curious incident here is that The Actor Kevin Eldon featured in The Story of the Twos too, as nervous-tic-afflicted General Disaster in Blackadder.

He must have missed their satire on BBC comedy punchlines over-relying on attacks on OMG The Daily Mail.

As Stephen Fry would possibly say, ''You bloody Disaster!!!''