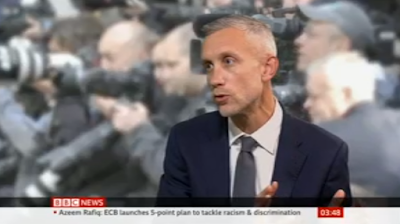 This week's Newswatch discussed the issue of whether it's wrong to call the people crossing the Channel in small boats 'migrants' or whether 'less dehumanising' language, such as 'people', should be used instead.
This is how the subsequent interview transpired.
In it, BBC boss Richard Burgess also told us why the BBC believes it ''wouldn't be accurate'' to label such people 'illegal immigrants' [as, say, Migration Watch does]:
Samira Ahmed: And to discuss the use of language on this story I am joined now by Richard Burgess, Executive Editor for UK Content at BBC News. Richard, thank you very much for coming on Newswatch. A lot of viewers are saying why don't you just call them 'people'?
Richard Burgess: Well, I think, first of all, I should say, this was a terrible human, tragedy as you were reflecting there. And I think it's important that our coverage reflects that in a sensitive way and in a respectful way. In terms of the use of 'migrant', I think it's about being as clear and as accurate as we can be for the audience. It's a term that the audience understands, we know that from research. And, ultimately, it actually explains why those people were on the Channel. They were migrating, they were migrants, they were trying to move to another country. So I think it's about being clear and accurate. But at the same time, absolutely going on to try and tell the stories of those people as individuals.
Samira Ahmed: Some people - and including the Home Secretary, it seems - are apparently saying that the BBC's language is dehumanising.
Richard Burgess: I don't think so. And I think we need to be a little careful here. The term "migrant" is about a person on the move - and a person on the move, often, for very good reasons - to avoid war, to avoid persecution, to get a better life for themselves. And we work really hard with our reporting to humanise the story, to speak to people who who are making those perilous journeys, often. I don't know if you saw Nick Beake's report from Dunkirk on the six and ten o'clock news where he spoke to one of the people in the migrant camp there who had actually spoken to two people who were on that boat. And it was so moving. And I think that's really incumbent upon us to really work hard to tell the stories of these individuals, the journeys they've made, the pressures on them.
Samira Ahmed: I should say as well that there are some viewers who contacted us to say that they should all be called 'illegal immigrants'. What is the BBC's position?
Richard Burgess: Again, I think it's about being accurate because I don't think that is accurate. If you look at the UN's description on this, anybody has the right to claim asylum in another country. We don't know what the status of all those people who died on the boat were, but some may well have been seeking asylum, might've had refugee status. So it wouldn't be accurate to describe them as 'illegal'.
Samira Ahmed: How does the BBC decide what each word to use? You know, there's the word 'refugee', there's the term 'asylum-seeker', and then the term 'migrant'. How do you decide when to use which one?
Richard Burgess: We use 'migrants' in this case because often it's not clear the reasons why somebody is travelling. As I say, they could be seeking asylum, they may already have refugee status, they may be somebody who's on the move for a better life for themselves and their families. So I think it's about us being as accurate as we can. And as we get more information on people, we get more accurate. In this case we've talked furtherly about men, women, a pregnant woman on the boat, children. So as you get more information, you get names, you get back stories, and I think that's a really important part of a journalism.
Samira Ahmed: When a tragedy happens like in the past week with the 27 people who drowned in the Channel, it does create a huge emotional response from the public, and I wonder if it's a challenge particularly at those moments for the BBC to get the terminology right in reporting such a story.
Richard Burgess: Absolutely. And, you know, journalists within the BBC feel that emotion as well. I think it's about being accurate, as I say, but I think it's about trying to tell stories, but also trying to get to the issues that obviously relate to this matter. So whether that's political issues, diplomatic issues, issues for local communities, the bigger geopolitical issues around wars around the world. So it's important that we try to put these things into context, it's important we try and tell the human stories, and get our terminology right.
Samira Ahmed: Richard Burgess, thank you.
Posted by Craig at 07:45