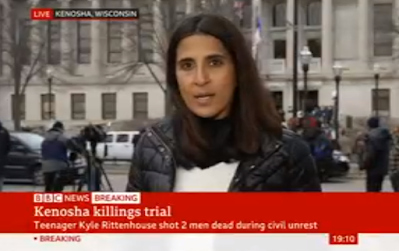 Shaun Ley: Nomia Iqbal has been following the trial in Kenosha and she joins us from outside the courthouse. A highly charged situation the night of these killings and it's been a highly controversial trial. Tell us what happened today.
Nomia Iqbal: It has been. After more than 26 hours of deliberations, the juror made up of seven women and five men finally released their verdict today and have cleared the 18-year-old Kyle Rittenhouse on every single charge. I just want to read you a statement that has just been released from the family of the second man that he shot dead last year. Anthony Huber. They have said that 'it sends the unacceptable message that armed civilians can show up in any town, incite violence and then use the danger they have created to justify shooting people in the streets.' And that is the core argument that many liberal groups are making about the fact that Mr Rittenhouse has been cleared because this isn't just about what happened here in Kenosha. This verdict has been seen as almost a referendum on the very polarising issue of gun ownership in America. For conservative, who largely backed Mr Rittenhouse, he is the Second Amendment personified, and for them, pro-gun rights groups, this a victory. They say it's a victory for the Second Amendment, that he is a patriot that was standing up to lawlessness. But liberal groups back this argument that's been made by the family, that what sort of message does this send out that people can turn up to protests with guns and not face any consequences. and not face any consequences. Kyle Rittenhouse was very emotional when that verdict was read out, but I suppose for a lot of people here - there are a lot of protestors outside the courthouse - it just leaves a very worrying conclusion. I spoke to the family, the uncle of Jacob Blake. Now he was...he is a black man that was shot by a white police officer last year, which sparked the protests in the first place which then ended up with Kyle Rittenhouse entering the city on the third night. He said to me that if Kyle Rittenhouse had been black he believes that the police would have shot him. And so there's so many issues that this trial embodies, but as I say, for the many liberal groups this is sending out a worrying message. And because of the rule double jeopardy as well in this case, Kyle Rittenhouse can never be tried for this case again. There can be no appeal and he's walked out of court a free man today.
Shaun Ley: Nomia Iqbal, thank you very much.
Posted by Craig at 10:06