Just before 6.20pm I checked the Sky News website and saw this lead headline: 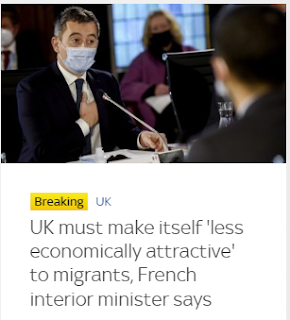 The Sky report quoted Gerald Darmanin, the megaphone-mouthed French interior minister, sounding off tonight and saying that those crossing the Channel are:

...attracted by England, especially the labour market which means you can work in England without any identification.

Britain must take its responsibility and limit its economic attractiveness. Britain left Europe, but not the world.

We need to work seriously on these questions, without being held hostage by domestic British politics.

M. Darmanin is very 'off-message' there, BBC-wise - at least in the first two paragraphs of the quote above.

He's saying [a] that the people in the boats are mainly economic migrants, and [b] that the UK's economically attractiveness is acting as a magnet for such people, and [c] that we in the UK need to make our country less of an easy touch to deter them from coming. And I think he's right on all three counts.

I wondered how the BBC News website would report that and saw that they got round to it late, at 6.54pm, under this headline: 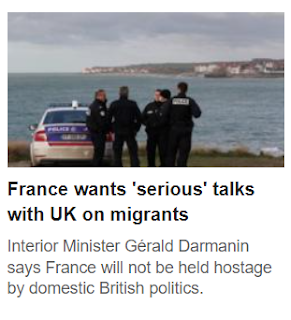 I wanted to know if the BBC would downplay the 'off-message' bits, and sure enough those bits  - the ones Sky led on - weren't featured prominently in the opening paragraphs of the BBC report.

Moreover, it was the BBC-palatable bits that led the BBC report.

[The BBC evidently wants to keep the focus on French anger at the non-'serious' UK.]

You have to go to the 15th paragraph of the whole BBC report, close to the end, to get a short mention of M. Darmanin's 'off-message' bits.

Now, I don't think there's any way that this isn't deliberately deceptive on the BBC's part.

They omitted the bit about how the migrants crossing the Channel are ''attracted by England, especially the labour market which means you can work in England without any identification''.

And - even more of a giveaway - that short 15th paragraph [''But he also argued that the UK had to assume responsibility by making itself less economically attractive for illegal migrants''] is immediately followed by a longer one that re-asserts the BBC's preferred take:

In the few studies that exist, family ties have been identified as the main reason migrants wish to travel from France to the UK. Immigration expert Marley Morris told the BBC the UK had introduced policies that make it much harder to work illegally.

Note in passing here that this is cannily, preemptively caveated with the words ''in the few studies that exist'' - yet those studies are the ones the BBC have been citing again and again in recent days -  and that the BBC then adds a touch of 'bias by authority' by calling Marley Morris an ''immigration expert''. I'd never heard of him, but he's a think-tanker from the centre-left IPPR with views to match. [I see that back in 2019 the BBC weren't averse to properly introducing him as ''Marley Morris, of the Institute for Public Policy Research, a centre-left think tank". Here they were keeping schtum and just going for ''immigration expert''.]

For me, this is an example of the BBC 'controlling the narrative' at its clearest. I don't see any other explanation for it.

The mouthy French interior minister said some things at a high-profile meeting that the UK was excluded from - some of which fitted the BBC's ongoing narrative, and some of which went completely against it. And, after waiting to report it for a while, the BBC crafted a report to;

[1] put all the emphasis on the criticism of the UK they approve of, and

[2] both [a] downplay and [b] try to counteract the criticism of the UK that flatly contradicts their ongoing narrative.

Please feel free to read it for yourselves and disagree if you think I'm wrong.